The Ocmulgee River and its tributaries provide drainage for some 6,180 square miles in parts of 33 Georgia counties, a large section of the Piedmont and coastal plain of central Georgia.

The name of the river may have come from a Hitchiti words oki ("water") plus molki ("bubbling" or "boiling"), possibly meaning "where the water boils up." 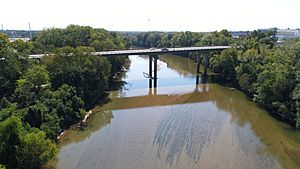 The river rises at a point in north central Georgia southeast of Atlanta, at the confluence of the Yellow, South, and Alcovy rivers. Since the construction of the Lloyd Shoals Dam in the early 20th century, these rivers join as arms of the Jackson Lake reservoir. The river's source is formed at an elevation of around 530 feet above sea level.

The Ocmulgee River flows from the dam southeast past Macon, which was founded on the Fall Line. It joins the Oconee from the northwest (241 miles downstream from Jackson Lake) to form the Altamaha near Lumber City. The Ocmulgee River Water Trail begins from Macon's Amerson River Park to the confluence near Lumber city and Hazelhurst, encompassing approximately 200 miles.

Four power plants in the Ocmulgee basin that use the river's water, including the coal-fired Plant Scherer in Juliette, operated by the Georgia Power Company. Plant Scherer is the seventh-largest power plant in the United States by capacity (based on 2016 data)[update], and the largest to be fueled exclusively by coal.

A diverse array of fish—105 species in twenty-one families—inhabit the Ocmulgee River basin. The family with the largest representation in the river basin is Cyprinidae (carp and true minnows), with 27 species. It is followed by Centrarchidae (sunfish), which has 22 species. The Ocmulgee basin contains ten species in the family Ictaluridae (catfish) and eight species of in the family Catostomidae (suckers). The river basin is also inhabited by one State of Georgia-designated endangered fish species, the Altamaha shiner (Cyprinella xaenura) and two designated rare species, the goldstripe darter (Etheostoma parvipinne) and redeye chub (Notropis harperi).

Archeological evidence shows that Native Americans first inhabited the Ocmulgee basin about 10,000 to 15,000 years ago (see settlement of the Americas). Scraping tools and flint spearpoints from nomadic Paleoindians hunters have been discovered in the Ocmulgee floodplain.

In the Archaic period (c. 8000-1000 BCE) which followed, hunter-gatherers in Ocmulgee basin used fiber-tempered pottery and stone tools. During the Woodland period (c. 1000 BCE-900 CE), there were various villages in the area, evidenced by earthen mounds and pottery sherds.

There is evidence that the Mississippian culture reached the Ocmulgee basin by 900 CE; according to the New Georgia Encyclopedia, "on the Macon plateau and in the nearby Ocmulgee bottomlands, stretches of farmsteads and gardens constructed around elaborate ceremonial mounds are the most prominent evidence of this early Mississippian influence." These areas are now part of the Ocmulgee National Monument, a National Park Service-administered protected area established in 1936.

Europeans first explored the Ocmulgee basin in 1540, during the expedition of the Spanish explorer Hernando de Soto and his party, who visited the late Mississippian chiefdom of Ichisi, now identified by archeologists as the floodplain south of Macon. The Ichisi served corncakes, wild onion, and roasted venison to De Soto and his party. Over the next hundred years, however, the Native Americans in the area were devastated from disease and chaos following European contract.

Eli Whitney's invention of the cotton gin stimulated development of short-staple cotton plantations in the uplands, where it grew well. The gin mechanized processing of the cotton and made it profitable. Demand for land in the Southeast increased, as well as demand for slave labor in the Deep South. In 1806, the U.S. acquired the area between the Oconee and Ocmulgee rivers from the Creek Indians by the First Treaty of Washington. That same year United States Army established Fort Benjamin Hawkins overlooking the Ocmulgee Fields. In 1819 the Creek held their last meeting at Ocmulgee Fields. they ceded this territory in 1821.

In the same year, the McCall brother established a barge-building operation at Macon. The first steamboat arrived on the river in 1829. During the 19th century, the river provided the principal water navigation route for Macon, allowing the development of the cotton industry in the surrounding region. In 1842 the river was connected by railroad to Savannah. The river froze from bank to bank in 1886. In 1994 devastating floods on the river after heavy rains caused widespread damage around Macon.

Major creeks that flow into the Ocmulgee River include:

All content from Kiddle encyclopedia articles (including the article images and facts) can be freely used under Attribution-ShareAlike license, unless stated otherwise. Cite this article:
Ocmulgee River Facts for Kids. Kiddle Encyclopedia.