Eli Whitney (December 8, 1765 – January 8, 1825) was an American inventor. He is known as the inventor of the cotton gin, an important invention in the Industrial Revolution. He made it in 1793 March 14. Born in Westborough, Massachusettes. 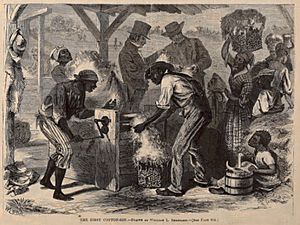 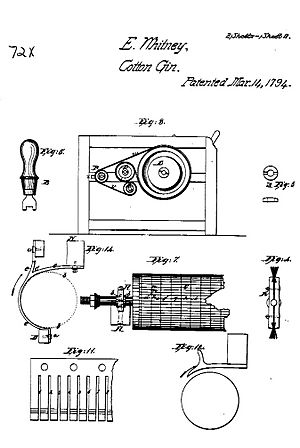 Cotton Gin Patent. It shows sawtooth gin blades, which were not part of Whitney's original patent. 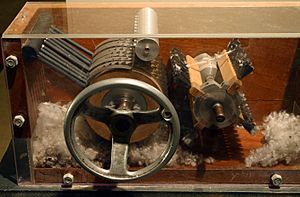 A cotton gin on display at the Eli Whitney Museum.

The cotton gin is a mechanical device that removes the seeds from cotton, a process that had previously been extremely labor-intensive. The word gin is short for engine. While staying at Mulberry Grove, Whitney constructed several ingenious household devices which led Mrs Greene to introduce him to some businessmen who were discussing the desirability of a machine to separate the short staple upland cotton from its seeds, work that was then done by hand at the rate of a pound of lint a day. In a few weeks Whitney produced a model. The cotton gin was a wooden drum stuck with hooks that pulled the cotton fibers through a mesh. The cotton seeds would not fit through the mesh and fell outside. Whitney occasionally told a story wherein he was pondering an improved method of seeding the cotton when he was inspired by observing a cat attempting to pull a chicken through a fence, and able to only pull through some of the feathers.

Whitney applied for the patent for his cotton gin on October 28, 1793, and received the patent (later numbered as X72) on March 14, 1794, but it was not validated until 1807. Whitney and his partner, Miller, did not intend to sell the gins. Rather, like the proprietors of grist and sawmills, they expected to charge farmers for cleaning their cotton – two-fifths of the value, paid in cotton. Resentment at this scheme, the mechanical simplicity of the device and the primitive state of patent law, made infringement inevitable. Whitney and Miller could not build enough gins to meet demand, so gins from other makers found ready sale. Ultimately, patent infringement lawsuits consumed the profits (one patent, later annulled, was granted in 1796 to Hogden Holmes for a gin which substituted circular saws for the spikes) and their cotton gin company went out of business in 1797. One oft-overlooked point is that there were drawbacks to Whitney's first design. There is significant evidence that the design flaws were solved by his sponsor, Mrs. Greene, but Whitney gave her no public credit or recognition.

After validation of the patent, the legislature of South Carolina voted $50,000 for the rights for that state, while North Carolina levied a license tax for five years, from which about $30,000 was realized. There is a claim that Tennessee paid, perhaps, $10,000. While the cotton gin did not earn Whitney the fortune he had hoped for, it did give him fame. It has been argued by some historians that Whitney's cotton gin was an important if unintended cause of the American Civil War. After Whitney's invention, the plantation slavery industry was rejuvenated, eventually culminating in the Civil War.

The cotton gin transformed Southern agriculture and the national economy. Southern cotton found ready markets in Europe and in the burgeoning textile mills of New England. Cotton exports from the U.S. boomed after the cotton gin's appearance – from less than 500,000 pounds (230,000 kg) in 1793 to 93 million pounds (42,000,000 kg) by 1810. Cotton was a staple that could be stored for long periods and shipped long distances, unlike most agricultural products. It became the U.S.'s chief export, representing over half the value of U.S. exports from 1820 to 1860.

Paradoxically, the cotton gin, a labor-saving device, helped preserve and prolong slavery in the United States for another 70 years. Before the 1790s, slave labor was primarily employed in growing rice, tobacco, and indigo, none of which were especially profitable anymore. Neither was cotton, due to the difficulty of seed removal. But with the invention of the gin, growing cotton with slave labor became highly profitable – the chief source of wealth in the American South, and the basis of frontier settlement from Georgia to Texas. "King Cotton" became a dominant economic force, and slavery was sustained as a key institution of Southern society.

All content from Kiddle encyclopedia articles (including the article images and facts) can be freely used under Attribution-ShareAlike license, unless stated otherwise. Cite this article:
Eli Whitney Facts for Kids. Kiddle Encyclopedia.