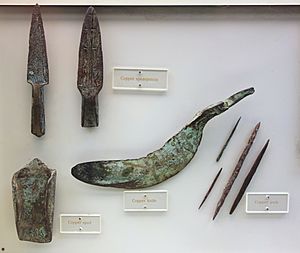 Copper knife, spearpoints, awls, and spud, from the Late Archaic period, Wisconsin, 3000-1000 BC

In the classification of the archaeological cultures of North America, the Archaic period or "Meso-Indian period" in North America, starts from about 8000 BC, and it ends at about 1000 BC. In the sequence of North American pre-Columbian cultural stages, is a period defined by the archaic stage of cultural development. The Archaic stage is characterized by subsistence economies. These economies were supported through the use of nuts, seeds, and shellfish. Because it ended when people started using sedentary farming, this date can be different by a lot across the Americas.

The rest of the Americas also have an Archaic Period.

This classification system was first proposed by Gordon Willey and Philip Phillips in the widely accepted 1958 book Method and Theory in American Archaeology.

All content from Kiddle encyclopedia articles (including the article images and facts) can be freely used under Attribution-ShareAlike license, unless stated otherwise. Cite this article:
Archaic period (North America) Facts for Kids. Kiddle Encyclopedia.