Paleo-Indians, Paleoindians or Paleo-Americans, were the first peoples who entered, and subsequently inhabited, the Americas during the final glacial episodes of the late Pleistocene period. The prefix "paleo-" comes from the Greek adjective palaios (παλαιός), meaning "old" or "ancient". The term "Paleo-Indians" applies specifically to the lithic period in the Western Hemisphere and is distinct from the term "Paleolithic".

Traditional theories suggest that big-animal hunters crossed the Bering Strait from North Asia into the Americas over a land bridge (Beringia). This bridge existed from 45,000 to 12,000 BCE (47,000–14,000 BP). Small isolated groups of hunter-gatherers migrated alongside herds of large herbivores far into Alaska. From c. 16,500 – c. 13,500 BCE (c. 18,500 – c. 15,500 BP), ice-free corridors developed along the Pacific coast and valleys of North America. This allowed animals, followed by humans, to migrate south into the interior of the continent. The people went on foot or used boats along the coastline. The precise dates and routes of the peopling of the Americas remain subjects of ongoing debate. At least two morphologically different Paleo-Indian populations were coexisting in different geographical areas of Mexico 10,000 years ago.

Stone tools, particularly projectile points and scrapers, are the primary evidence of the earliest human activity in the Americas. Archaeologists and anthropologists use surviving crafted lithic flaked tools to classify cultural periods. Scientific evidence links Indigenous Americans to eastern Siberian populations. Indigenous peoples of the Americas have been linked to Siberian populations by linguistic factors, the distribution of blood types, and genetic composition as indicated by molecular data, such as DNA. There is evidence for at least two separate migrations. From 8000 to 7000 BCE (10,000–9,000 BP) the climate stabilized, leading to a rise in population and lithic technology advances, resulting in a more sedentary lifestyle.

Migration into the Americas

Map of early human migrations based on the Out of Africa theory.

The specifics of Paleo-Indian migration to and throughout the Americas, including the exact dates and routes traveled, are subject to ongoing research and discussion. The traditional theory has been that these early migrants moved into Beringia between eastern Siberia and present-day Alaska 17,000 years ago, when sea levels were significantly lowered due to the Quaternary glaciation. These people are believed to have followed herds of now-extinct pleistocene megafauna along ice-free corridors that stretched between the Laurentide and Cordilleran ice sheets. Another route proposed is that, either on foot or using primitive boats, they migrated down the Pacific coast to South America. Evidence of the latter would since have been covered by a sea level rise of hundreds of meters following the last ice age.

Archaeologists contend that Paleo-Indians migration out of Beringia (western Alaska), ranges from c. 40,000 – c. 16,500 years ago. This time range is a source of debate and promises to continue as such for years to come. The few agreements achieved to date are the origin from Central Asia, with widespread habitation of the Americas during the end of the last glacial period, or more specifically what is known as the late glacial maximum, around 16,000–13,000 years before present. However, alternative theories about the origins of Paleoindians exist, including migration from Europe.

Sites in Alaska (East Beringia) are where some of the earliest evidence has been found of Paleo-Indians, followed by archaeological sites in northern British Columbia, western Alberta and the Old Crow Flats region in the Yukon. The Paleo-Indian would eventually flourish all over the Americas. These peoples were spread over a wide geographical area; thus there were regional variations in lifestyles. However, all the individual groups shared a common style of stone tool production, making knapping styles and progress identifiable. This early Paleo-Indian period lithic reduction tool adaptations have been found across the Americas, utilized by highly mobile bands consisting of approximately 20 to 60 members of an extended family. Food would have been plentiful during the few warm months of the year. Lakes and rivers were teeming with many species of fish, birds and aquatic mammals. Nuts, berries and edible roots could be found in the forests and marshes. The fall would have been a busy time because foodstuffs would have to be stored and clothing made ready for the winter. During the winter, coastal fishing groups moved inland to hunt and trap fresh food and furs.

Late ice age climatic changes caused plant communities and animal populations to change. Groups moved from place to place as preferred resources were depleted and new supplies were sought. Small bands utilized hunting and gathering during the spring and summer months, then broke into smaller direct family groups for the fall and winter. Family groups moved every 3–6 days, possibly traveling up to 360 km (220 mi) a year. Diets were often sustaining and rich in protein due to successful hunting. Clothing was made from a variety of animal hides that were also used for shelter construction. During much of the Early and Middle Paleo-Indian periods, inland bands are thought to have subsisted primarily through hunting now-extinct megafauna. Large Pleistocene mammals were the giant beaver, steppe wisent, musk ox, mastodons, woolly mammoths and ancient reindeer (early caribou).

The Clovis culture, appearing around 11,500 BCE (c. 13,500 BP), undoubtedly did not rely exclusively on megafauna for subsistence. Instead, they employed a mixed foraging strategy that included smaller terrestrial game, aquatic animals, and a variety of flora. Paleo-Indian groups were efficient hunters and carried a variety of tools. These included highly efficient fluted style spear points, as well as microblades used for butchering and hide processing. Projectile points and hammerstones made from many sources are found traded or moved to new locations. Stone tools were traded and/or left behind from North Dakota and Northwest Territories, to Montana and Wyoming. Trade routes also have been found from the British Columbia Interior to the coast of California.

The glaciers that covered the northern half of the continent began to gradually melt, exposing new land for occupation around 17,500–14,500 years ago. At the same time as this was occurring, worldwide extinctions among the large mammals began. In North America, camels and horses eventually died off, the latter not to reappear on the continent until the Spanish reintroduced the species near the end of the 15th century CE. As the Quaternary extinction event was happening, the Late Paleo-Indians would have relied more on other means of subsistence.

From c. 10,500 – c. 9,500 BCE (c. 12,500 – c. 11,500 BP), the broad-spectrum big game hunters of the great plains began to focus on a single animal species: the bison (an early cousin of the American bison). The earliest known of these bison-oriented hunting traditions is the Folsom tradition. Folsom peoples traveled in small family groups for most of the year, returning yearly to the same springs and other favored locations on higher ground. There they would camp for a few days, perhaps erecting a temporary shelter, making and/or repairing some stone tools, or processing some meat, then moving on. Paleo-Indians were not numerous and population densities were quite low.

The Archaic period in the Americas saw a changing environment featuring a warmer more arid climate and the disappearance of the last megafauna. The majority of population groups at this time were still highly mobile hunter-gatherers, but now individual groups started to focus on resources available to them locally. Thus with the passage of time there is a pattern of increasing regional generalization like the Southwest, Arctic, Poverty, Dalton and Plano traditions. These regional adaptations would become the norm, with reliance less on hunting and gathering, and a more mixed economy of small game, fish, seasonally wild vegetables and harvested plant foods. Many groups continued to hunt big game but their hunting traditions became more varied and meat procurement methods more sophisticated. The placement of artifacts and materials within an Archaic burial site indicated social differentiation based upon status in some groups. 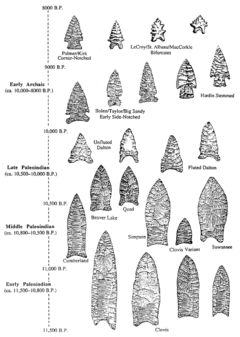 Different types of Projectile points, from the Paleo-Indian periods in the south eastern United States.

Paleo-Indians are generally classified by lithic reduction or lithic core "styles" and by regional adaptations. Lithic technology fluted spear points, like other spear points, are collectively called projectile points. The projectiles are constructed from chipped stones that have a long groove called a "flute". The spear points would typically be made by chipping a single flake from each side of the point. The point was then tied onto a spear of wood or bone. As the environment changed due to the ice age ending around 17–13Ka BP on short, and around 25–27Ka BP on the long, many animals migrated overland to take advantage of the new sources of food. Humans following these animals, such as bison, mammoth and mastodon, thus gained the name big-game hunters. Pacific coastal groups of the period would have relied on fishing as the prime source of sustenance.

Archaeologists are piecing together evidence that the earliest human settlements in North America were thousands of years before the appearance of the current Paleo-Indian time frame (before the late glacial maximum 20,000 plus years ago). Evidence indicates that people were living as far east as northern Yukon, in the glacier-free zone called Beringia before 30,000 BCE (32,000 BP). Until recently, it was generally believed that the first Paleo-Indian people to arrive in North America belonged to the Clovis culture. This archaeological phase was named after the town of Clovis, New Mexico, where in 1936 unique Clovis points were found in situ at the site of Blackwater Draw, where they were directly associated with the bones of Pleistocene animals.

Recent data from a series of archaeological sites throughout the Americas suggest that Clovis (thus the "Paleo-Indians") time range should be re-examined. In particular, sites located near Cactus Hill in Virginia, Meadowcroft Rockshelter in Pennsylvania, Monte Verde in Chile, Topper in South Carolina, and Quintana Roo in Mexico have generated early dates for wide-ranging Paleo-Indian occupation. Some sites significantly predate the migration time frame of ice-free corridors, thus suggesting that there were additional coastal migration routes available, traversed either on foot and/or in boats. Geological evidence suggests the Pacific coastal route was open for overland travel before 23,000 years ago and after 16,000 years ago.

In South America, the site of Monte Verde indicates that its population was probably territorial and resided in their river basin for most of the year. Some other South American groups, on the other hand, were highly mobile and hunted big-game animals such as mastodon and giant sloths. They used classic bifacial projectile point technology.

The primary examples are populations associated with El Jobo points (Venezuela), fish-tail or Magallanes points (various parts of the continent, but mainly the southern half), and Paijan points (Peru and Ecuador) at sites in grasslands, savanna plains, and patchy forests.

The dating for these sites ranges from c. 14,000 BP (for Taima-Taima in Venezuela) to c. 10,000 BP. The bi-pointed El Jobo projectile points were mostly distributed in north-western Venezuela; from the Gulf of Venezuela to the high mountains and valleys. The population using them were hunter-gatherers that seemed to remain within a certain circumscribed territory. El Jobo points were probably the earliest, going back to c. 14,200 – c. 12,980 BP and they were used for hunting large mammals. In contrast, the fish-tail points, dating to c. 11,000 B.P. in Patagonia, had a much wider geographical distribution, but mostly in the central and southern part of the continent.

All content from Kiddle encyclopedia articles (including the article images and facts) can be freely used under Attribution-ShareAlike license, unless stated otherwise. Cite this article:
Paleo-Indians Facts for Kids. Kiddle Encyclopedia.