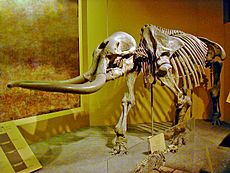 The Gomphotheres were a varied family of extinct elephant-like animals (proboscidea) – the Gomphotheriidae. They had a wide distribution. They were common in North America during the Miocene and Pliocene epochs, 12–1.6 million years ago. Some lived in parts of Eurasia, Beringia and, after the Great American Interchange, South America.

Beginning about 5 million years ago, they were gradually replaced by modern elephants. The last two South American species, in the genus Cuvieronius, did not become extinct until about 9000 years ago. Stegomastodon remains have been dated as recently as 6,000 years ago in the Valle del Magdalena, Colombia. Gomphotheres also survived in Mexico and Central America until the end of the Pleistocene. 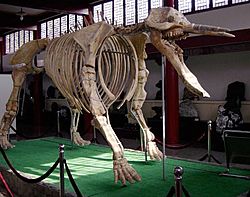 All content from Kiddle encyclopedia articles (including the article images and facts) can be freely used under Attribution-ShareAlike license, unless stated otherwise. Cite this article:
Gomphothere Facts for Kids. Kiddle Encyclopedia.