Gomphotherium is an extinct genus of proboscid which evolved in the lower Miocene of North America. It survived from 13.65–1.7 million years ago (mya).

They spread to Asia, Europe and Africa after a drop in sea level allowed them to cross over. It survived into the Pliocene, and its remains have been found in Chile, china, France, Germany, Austria, Kansas, Tennessee, Pakistan, Kenya and Bosnia and Herzegovina. 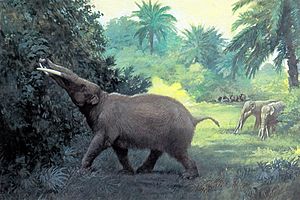 Gomphotherium stood around 3 metres (9.8 ft) high with an estimated weight of 4-5 tons, and looked similar to a modern elephant. However, it had four tusks; two on the upper jaw and two on the long lower jaw. Gomphotherium lived in dry wooded regions near lakes.

The lower tusks are parallel and shaped like a shovel. They may have been used to dig up food from mud. These animals probably lived in swamps or near lakes, using their tusks to dig or scrape up aquatic vegetation.

However, wear patterns on the teeth of its relative Platybelodon suggest that it used its lower tusks to strip bark from trees, and may have used the sharp incisors that formed the edge of the "shovel" more like a modern-day scythe, grasping branches with its trunk and rubbing them against the lower teeth to cut it from a tree.

Unlike modern elephants, the upper tusks were covered by a layer of enamel. Compared to elephants, the skull was more elongated and low, indicating that the animal had a short trunk, rather like a tapir's. In comparison to earlier proboscids, Gomphotherium had fewer molars; the remaining ones had high ridges to expand their grinding surface.

All content from Kiddle encyclopedia articles (including the article images and facts) can be freely used under Attribution-ShareAlike license, unless stated otherwise. Cite this article:
Gomphotherium Facts for Kids. Kiddle Encyclopedia.