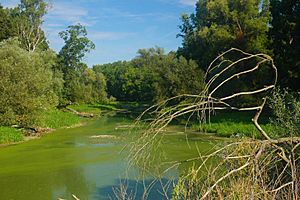 An oxbow lake is a lake, or area of water, in a U-shape. It is made by special bends in a river, called meanders, getting farther away from the river until they become separate. The river becomes straight and the bend becomes a lake. This happens due to floods or when a meander's neck gets too thin.

Why does this happen?

The bend moves farther and farther along until it leaves the river. The river becomes straight and the bend is left as an oxbow lake.

All content from Kiddle encyclopedia articles (including the article images and facts) can be freely used under Attribution-ShareAlike license, unless stated otherwise. Cite this article:
Oxbow lake Facts for Kids. Kiddle Encyclopedia.