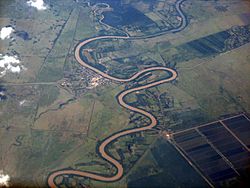 Meanders of the Rio Cauto, Cuba

Diagram of a meander forming

A meander is a curve in a river. Meanders form a snake-like pattern as the river flows across a fairly flat valley floor. The position of the curves changes over time.

A river rarely flows in a straight line- it will bend around something in its course for example a tree or hard rock. This results in areas of slower and faster water movement. The river flows faster on the outside of the curve, and the fast water erodes the outside bends of a river channel by hydraulic action and abrasion. This forms a river cliff. The river flows more slowly on the inside of the river beach. The slow water drops sediment. Continuous erosion on the outer bank and deposition on the inner bank will expand the bend in the river. This is called a meander. Over time, meanders become larger and more visible.

Eventually meanders turn into oxbow lakes when two outside bends erode together making a shorter route for the water.

Meanders were named for a river in Anatolia.

All content from Kiddle encyclopedia articles (including the article images and facts) can be freely used under Attribution-ShareAlike license, unless stated otherwise. Cite this article:
Meander Facts for Kids. Kiddle Encyclopedia.