The Waimakariri River in the South Island of New Zealand is a braided river. 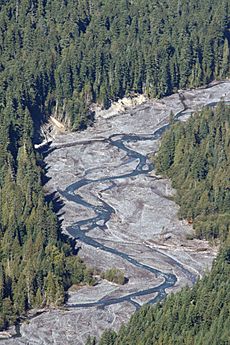 The White River in Washington state

A braided river is a network of small channels separated by islands that are often not fixed. They can be found in places where the river carries a lot of sediment, or when it slows down and spreads out, like in a river delta.

Large braided river systems are found in only a few places around the world:

All these regions contain young mountains that face quick erosion.

Europe contains two braided rivers: the Narew, in Poland and Belarus, and the Tagliamento in northeastern Italy.

All content from Kiddle encyclopedia articles (including the article images and facts) can be freely used under Attribution-ShareAlike license, unless stated otherwise. Cite this article:
Braided river Facts for Kids. Kiddle Encyclopedia.