Dublin is a city in Laurens County, Georgia, United States. As of the 2020 census, the city had a population of 16,074. It is the county seat of Laurens County.

The original settlement was named after Dublin, Ireland. Because of Dublin's location as a midpoint between Savannah and Atlanta, the town in recent decades became home to a small assortment of industrial distribution centers, which complemented various industries—textiles, furniture, and paper, among others—that had already established themselves there in the second half of the 20th century. Historically, however, Dublin's economy was based on the local cotton, corn, and soybean trades, which blossomed as the town's central location enabled it to thrive with the growth of the railroad. 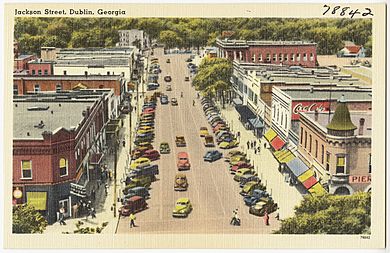 Originally, Dublin and the surrounding area was home to Native Americans of the Muskogee people. Most of the Muskogee fled westward with the arrival of European settlers, many of them organizing themselves into armed resistance units, which fought government forces and British militias to protect their native territory well into the early 19th century. Ultimately, most of the Muskogee diaspora settled in what is now Oklahoma. 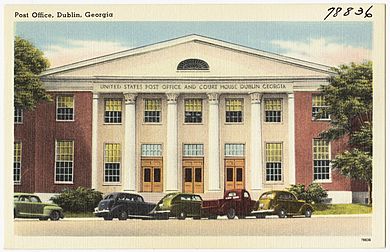 Despite the Irish ancestry of Dublin's first non-indigenous settlers, the town, like most of Middle Georgia, by the late 19th century had evolved from mixture of ethnicities. Most of the population descended from Scottish, English, and other western European immigrants. The considerable African-American population descended from most of whose roots lay in Angola or throughout west Africa. By the end of the 20th century, the town had also become home to a growing population of recent immigrants, many of them professionals from India, Korea, and Latin America. As labor migrations from Mexico and Central America shifted from the southwest U.S. to much of the southeast, many immigrants from those regions also moved to Dublin in the first decade of the 21st century. 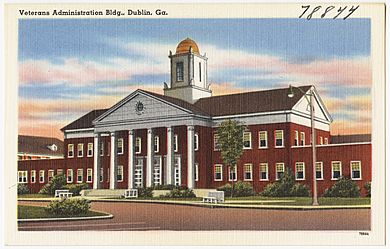 Dublin, according to a historical marker at the town's main Oconee bridge, was one of the last encampments at which Confederate President Jefferson Davis and his family stayed before being captured by Union forces in May 1865. 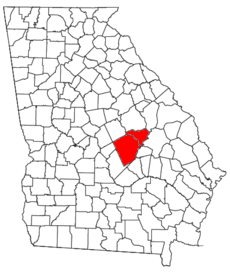 Location of the Dublin Micropolitan Statistical Area in Georgia

Dublin is the principal city of the Dublin Micropolitan Statistical Area, a micropolitan area that covers Johnson and Laurens counties and had a combined population of 53,434 at the 2000 census.

The town, along with a reference to the Oconee River and Laurens County, is mentioned in the opening page of James Joyce's Finnegans Wake: "nor had topsawyer's rocks by the stream Oconee exaggerated themselves to Laurens County's gorgios while they went doublin their mumper all the time." (Joyce explained in a letter: "Dublin, Laurens Co, Georgia, founded by a Dubliner, Peter Sawyer, on r. Oconee. Its motto: Doubling all the time.") 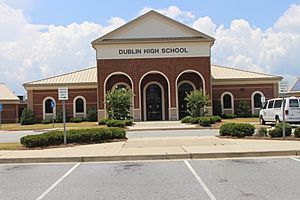 The Dublin City School District holds pre-school to grade twelve, and consists of two elementary schools, a middle school, a high school, and an alternative school. The district has approximately 2,400 students as of 2016.

The Laurens County School District holds grades pre-school to grade twelve, and serves areas outside of the Dublin city limits.

All content from Kiddle encyclopedia articles (including the article images and facts) can be freely used under Attribution-ShareAlike license, unless stated otherwise. Cite this article:
Dublin, Georgia Facts for Kids. Kiddle Encyclopedia.