McRae–Helena is a city in the U.S. state of Georgia, formed on January 1, 2015, by the merger of the two cities of McRae and Helena. McRae–Helena is the county seat of Telfair County.

It is the largest city in Telfair County, with an estimated population of 8,380 in 2018. This includes the population held as inmates at McRae Correctional Institution. 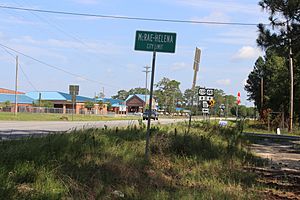 Major employers in McRae–Helena include:

In 2015 it was estimated there were 8,754 people, including the population held as inmates at McRae Correctional Institution, residing in the city. McRae-Helena as Telfair County's largest city is the cultural and economic center of the county. The city of McRae-Helena has a Trading Area of 25,000 people.

The Telfair County School District holds pre-school to grade twelve, and consists of one elementary school, a middle school, and a high school. The district has 112 full-time teachers and over 1,648 students.

All content from Kiddle encyclopedia articles (including the article images and facts) can be freely used under Attribution-ShareAlike license, unless stated otherwise. Cite this article:
McRae–Helena, Georgia Facts for Kids. Kiddle Encyclopedia.