McRae was a city in and the county seat of Telfair County, Georgia, United States. It was designated as the seat in 1871, after being established the previous year as a station on the Macon and Brunswick Railroad. Upon the city's merger with adjacent Helena in 2015, the new county seat is the combined city of McRae-Helena.

As of the 2010 census, McRae had a population of 5,740, up from 2,682 at the 2000 census, due largely to expansion of the city limits to incorporate the area and prison population of the McRae Correctional Institution, a privately owned and operated prison under contract to the federal government. The prison is a low-security facility holding adult males; it is owned and operated by CoreCivic. 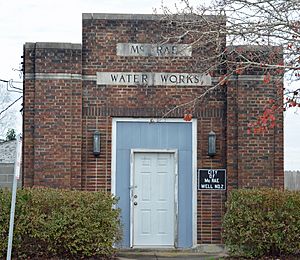 McRae was founded in 1870 as station number eleven on the Macon and Brunswick Railroad. In 1871, the seat of Telfair County was transferred to McRae from Jacksonville. McRae was incorporated as a town in 1874 and as a city in 1902.

McRae and Telfair County approved construction of a private prison in the early 21st century to hold federal prisoners, in the belief that it would provide jobs to local residents. McRae Correctional Facility, a low-security prison for adult males, has been owned and operated by CCA, the largest prison company in the United States in 2015, since it opened in 2003.

A Prison for McRae is a documentary film that explores McRae and Telfair County's decision to allow the prison, and the economic consequences of America's prison boom. It was produced for Arte France and has not been aired in the US. It was made before the prison opened.

Located in downtown McRae is Liberty Square, home of a Statue of Liberty replica that is one-twelfth the size of the original. It has a replica of the Liberty Bell and a marble memorial to Telfair County residents who died in military service.

On the outskirts of McRae is the Talmadge Home. This historic home was occupied by two former Georgia governors, Eugene Talmadge and Herman Eugene Talmadge. McRae was also the birthplace of Marion B. Folsom (1893–1976), a longtime executive of the Eastman Kodak Company who served as the United States Secretary of Health, Education, and Welfare during the Eisenhower administration.

Famous railfan photographer William B. Folsom is buried in McRae.

The Telfair County School District holds pre-school to grade twelve, and consists of one elementary school, a middle school, and a high school. The district has 112 full-time teachers and over 1,648 students.

All content from Kiddle encyclopedia articles (including the article images and facts) can be freely used under Attribution-ShareAlike license, unless stated otherwise. Cite this article:
McRae, Georgia Facts for Kids. Kiddle Encyclopedia.