Vidalia ( vye-DAYL-yə or vye-DAY-yə) is a city located primarily in Toombs County, Georgia, United States. The city also extends very slightly into Montgomery County. As of the 2010 census, the city population was 10,473.

Vidalia is the principal city of the Vidalia Micropolitan Statistical Area, a micropolitan area that covers Montgomery and Toombs Counties, and had a combined population of 36,346 at the 2010 census.

The town was incorporated on January 1, 1890. It is the largest city in Toombs County, but it is not the county seat. Although a Georgia website suggests the town may have been named "via dalia" ("road of dahlias"), it may have been named — like Vidalia, Louisiana — in honor of Don José Vidal, a Spanish aristocrat.

Like many towns in the region, Vidalia grew up around a rail yard that served farmers in the area who grew such crops as pecans and tobacco. The area's famous onions were not an important crop until much later.

In the 1950s, Piggly Wiggly grocery stores opened a distribution center in Vidalia, bringing with it a large influx of jobs as well as railroad business. At that time, Vidalia served as an interchange junction between the Central of Georgia and the Georgia and Florida (later both Southern railroads). For this, a large seven track yard was constructed, as well as a sizable engine servicing facility and interchange yard. The latter, smaller interchange yard is still in use to some degree by the Georgia Central railroad, while the larger yard was removed sometime in the 1970s. Dot Foods currently occupies most of the old Piggly Wiggly distribution center, with smaller companies leasing space.

Currently, the largest employers in Vidalia are Trane who has a large assembly plant and Wal-Mart which is rumored to be located on the former farm where the Vidalia sweet onions were first grown. 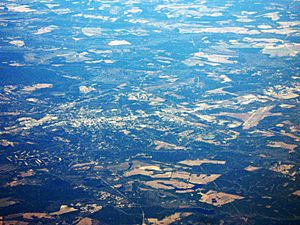 There were 4,167 households out of which 32.4% had children under the age of 18 living with them, 43.7% were married couples living together, 18.5% had a female householder with no husband present, and 33.8% were non-families. 30.5% of all households were made up of individuals and 12.7% had someone living alone who was 65 years of age or older. The average household size was 2.46 and the average family size was 3.06.

Each spring Vidalia holds a world-famous Onion Festival. The event lasts for five days and draws in many tourists with its wide variety of activities.

The Altama Gallery is a museum of history and art located inside the restored Brazell House.

Although it has never been officially confirmed, it is believed by locals that the 1996 song Vidalia sung by Sammy Kershaw alludes to the Vidalia Sweet Onion crop with its lyrics "...sweet Vidalia, You always gotta make me cry!" While uncertainty remains about the song, Vidalia sweet onions have recently made a name for the town through national media and the Onions and Ogres advertisement campaign which features the cartoon ogre Shrek.

All content from Kiddle encyclopedia articles (including the article images and facts) can be freely used under Attribution-ShareAlike license, unless stated otherwise. Cite this article:
Vidalia, Georgia Facts for Kids. Kiddle Encyclopedia.