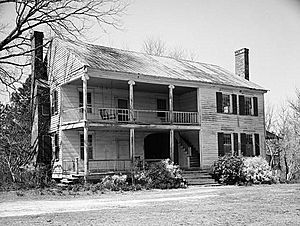 Hancock County is a county located in the U.S. state of Georgia. As of the 2010 census, the population was 9,429. The county seat is Sparta. The county was created on December 17, 1793 and named for John Hancock.

Before the Civil War, Hancock County's economy was based on growing cotton, and like most cotton-growing areas of the South, it had a large slave population, making up 61% of the total county population in the 1850 Census. Nevertheless, the county's representatives at the Georgia Secession Convention all voted against seceding.

In August 2015, the majority-white Hancock County Board of Elections sent deputy sheriffs to the homes of more than 180 African-Americans residing in the county seat of Sparta (making up 20% of the city's total registered voters) to inform them they would lose their voting rights unless they appeared in court to prove their residency. A total of 53 voters were initially removed the voting rolls, but a federal judge overturned the Board's actions.

All content from Kiddle encyclopedia articles (including the article images and facts) can be freely used under Attribution-ShareAlike license, unless stated otherwise. Cite this article:
Hancock County, Georgia Facts for Kids. Kiddle Encyclopedia.