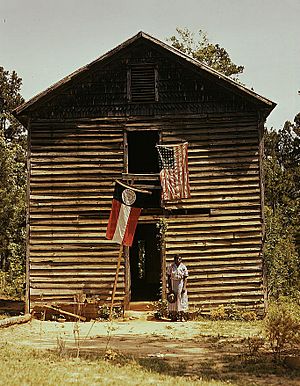 Greene County is a county located in the east central portion of the U.S. state of Georgia. As of the 2010 census, the population was 15,994. The county seat is Greensboro. The county was created on February 3, 1786 and is named for Nathanael Greene, an American Revolutionary War major general.

Greene County was formed on February 3, 1786, from land given by Washington County. It was named in honor of General Nathanael Greene, a hero of the American Revolutionary War.

In 2001, Georgia Supreme Court Chief Justice Robert Benham convened a committee to investigate indigent defense in the state of Georgia. An avalanche of complaints about the state of public defense in Greene County, along with a number of lawsuits filed by Stephen Bright and the Southern Center for Human Rights, contributed to the formation of this commission. The commission discovered during its investigation that indigent defendants in Greene County were routinely pleaded guilty by judges without the presence of counsel and sometimes without even being present in court to make their pleas, violations of the Sixth Amendment. Excessive bail, e.g. $50,000 for loitering, was often set as well, a violation of the Eight Amendment. After two years of investigation, the committee's recommendations led to the passage of the Georgia Indigent Defense Act.

All content from Kiddle encyclopedia articles (including the article images and facts) can be freely used under Attribution-ShareAlike license, unless stated otherwise. Cite this article:
Greene County, Georgia Facts for Kids. Kiddle Encyclopedia.