Kids Encyclopedia Facts
Not to be confused with Peachtree Corners, Georgia.

Peachtree City is located in western Fayette County in the southern Atlanta metro area. It is bordered to the west by Coweta County and to the north by the city of Tyrone. It is crossed by Georgia State Route 74, Georgia State Route 34, and Georgia State Route 54. SR 54 leads east 10 miles (16 km) to Fayetteville, the county seat, and southwest 17 miles (27 km) to Luthersville. Newnan is 12 miles (19 km) to the west via SR 54 and SR 34. SR 74, the Joel Cowan Parkway, runs through the west side of Peachtree City, leading north 6 miles (10 km) to Tyrone and 11 miles (18 km) to Interstate 85 near Fairburn. Downtown Atlanta is 31 miles (50 km) to the north via SR 74 and I-85.

Peachtree City has three lakes. Lake Kedron to the north is a reservoir that supplies Lake Peachtree to the south via Flat Creek. Lake Kedron is owned by the Fayette County Authority, and is managed so as to keep Lake Peachtree full whenever there is a lack of rain and still allow for recreational use of the lake during droughts. Lake Kedron is not afforded any recreational use except for fishing. Lake McIntosh, the newest lake, close to Planterra, has now reached full pool.

Shakerag Hill, with an elevation of 980 feet (300 m), is the highest point in the city and sits on the eastern border at the intersection of GA Hwy 54 and Robinson Road.

Peachtree City has a system of golf cart paths which spider across the town and provide a secondary means of access to almost any destination within city limits. These multi-use paths stretch for more than 90 miles (140 km) throughout the city. Many places of business have specially designated golf cart parking spaces. The Peachtree City Police Department has several golf carts used to patrol along these paths.

Over 9,000 households own a golf cart, and use them as an extra vehicle for local transportation. Children aged twelve or over may operate a cart on Peachtree City cart paths with a parent, grandparent or guardian in the front seat. Unaccompanied fifteen-year-olds with valid Georgia learner's permits are allowed to operate golf carts alone. Students at McIntosh High School are encouraged to drive family golf carts to school because of limited car parking. In 2015, Starr's Mill High School opened a golf-cart specific lot. The golf cart paths are used also by bikers, joggers, and pedestrians as a safer alternative to the side of the road. In February 2003, Golf Digest magazine discussed the traffic congestion caused by use of golf carts in the city.

Atlanta Regional Airport, also known as Falcon Field, is a general aviation airport that provides chartered air service. Since 1987, it has grown from having about 60 aircraft based at the airport to about 165. The runway is 5,220 feet (1,590 m) long and holds up to 60,000 pounds (27,000 kg) of aircraft. It mainly serves Peachtree City's business residents, but also serves as a place of entertainment for people interested. There is a viewing area provided for the public to watch aircraft take-off and land. The airport hosts many events throughout the year, including the Great Georgia Air Show. The airport is the location of a National Weather Service radar station, Southeast River Forecast Center, and Weather Forecast Office, which serves 96 counties in northern and central Georgia. 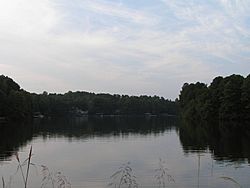 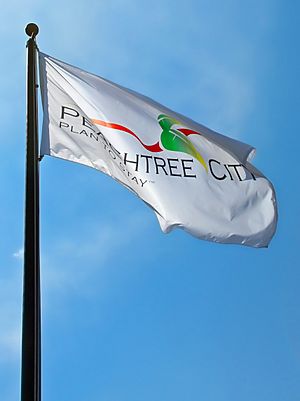 The official flag of Peachtree City, outside City Hall

In 2011, the city was ranked in the top 25 cities to relocate to by Relocate America.

Peachtree City was ranked number one for "Best Places to Raise Kids" in the state of Georgia, according to Bloomberg Business Week (December 2012).

There were 10,876 households out of which 47.1% had children under the age of 18 living with them, 70.8% were married couples living together, 8.4% had a female householder with no husband present, and 18.4% were non-families. 16.0% of all households were made up of individuals and 5.7% had someone living alone who was 65 years of age or older. The average household size was 2.89 and the average family size was 3.25.

Flat Creek Country Club offers 27 holes of golf. Designed by Joe Lee and opened in 1968, the course features three diverse nines, a variety of elevation changes, and views of the Flat Creek, which meanders throughout the course. Flat Creek also has a pool and tennis facility. The clubhouse offers both indoor and outdoor dining options including three separate dining rooms that can be combined, and a bar area with flat-screen TVs.

Braelinn Golf Club is a collaboration by architects Joe Lee and Rocky Roquemore, and opened in 1988. The 18-hole layout includes a mix of holes with tree-lined fairways, challenging water features and numerous bunkers. Members also enjoy swimming, tennis and dining facilities on site. The elegant clubhouse includes a pro shop, locker rooms and a grill-style restaurant overlooking the driving range.

Planterra Ridge Golf Club is a popular Jeff Burton and Rocky Roquemore design that was opened in 1994. Players of all ages and expertise enjoy 18 holes of greens and tree-lined fairways. Tennis, swimming and a variety of events enhance life at the club. The clubhouse sits above the course, with views of the finishing holes and practice green, a pro shop, locker rooms and a dining venue that offers both walk-up and sit-down service.

All three are owned by Clubcorp, which owns or operates an exclusive private club portfolio of more than 200 golf and country clubs, business clubs, sports clubs and alumni clubs in 26 states, the District of Columbia and two foreign countries. These clubs were formerly owned by Sequoia Golf, before Clubcorp purchased Sequoia in 2014.

All content from Kiddle encyclopedia articles (including the article images and facts) can be freely used under Attribution-ShareAlike license, unless stated otherwise. Cite this article:
Peachtree City, Georgia Facts for Kids. Kiddle Encyclopedia.