Rockdale County is a county located in the U.S. state of Georgia. As of the 2010 census, the population was 85,215. The county seat is Conyers. 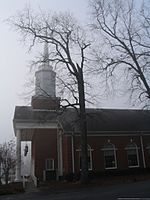 Rockdale County was created on October 18, 1870 and received its name from Rockdale Baptist Church (est. 1846), which was named after the granite strata that rests under the county's red clay top soil. A bill introduced by John F. Hardin and John Harris carved Rockdale out of the northern portion of Newton County; parts of Rockdale County also came from neighboring Henry, Walton, Gwinnett, and DeKalb counties. Conyers, Rockdale's only incorporated town and urban center, became the county seat.

Prior to Rockdale becoming a county, the land had been inhabited by the Creek and Cherokee; the boundary between the two native nations, the Hightower Trail, ran directly through area. Burial remains have been discovered in the Honey Creek and Hi-Roc areas. Whites began migrating to the area in the early 19th century and initial white settlers suffered from Indian raids. Early white settlements developed along Big Haynes Creek in the northern part of the county, the Yellow River in the middle portion of the county, and Honey Creek in the south. Communities formed around grist mills and newly formed churches such as Haralson Mill, Costleys Mill, Dial Mill, Zacharys Mill, McElroys Mill, Union Grove Baptist Church, Ebenezer Methodist Church, Philadelphia Methodist Church, Salem Baptist Church, Smyrna Presbyterian Church, Pleasant Hill Baptist Church, Bethel Christian Church, Honey Creek Baptist Church. Other communities included Magnet and Zingara. These settlers were largely subsistence farmers.

During the American Civil War, General William Tecumseh Sherman marched the Union Army north of Conyers on his way to Covington from Lithonia. The usual seizure and destruction of property accompanied the army's march through the area. Many of the residents of Conyers, fearing Sherman would raze the city, fled to nearby Social Circle in Walton County, since Conyers was an important stop on the Georgia Railroad. Conyers remained unscathed by the war, and the city is a fine example of residential and commercial architecture from the 19th century. According to a historical marker on U.S. Highway 278 west of Conyers, Major General Joseph Wheeler of the Confederate States Army and part of his staff were captured by Union troops pursuing Jefferson Davis on May 9, 1865. Wheeler was later released in Athens only to be recaptured again. He was wounded three times, had his horse shot out from under him sixteen times.

During Reconstruction, Conyers and Rockdale County experienced tremendous growth. According to the local newspaper, The Weekly Farmer, the population of Conyers increased from 300 to 2,000. The number of stores, businesses, schools, and churches of the county rapidly multiplied as well. Parts of the county were infamous for moonshining and the county became dry in 1882, prohibiting the sale and manufacture of liquor except by a licensed pharmacist as prescribed by a physician. The economy of the county was still based primarily on agriculture into the early 20th century. The PBS documentary The Lost Children of Rockdale County is about a syphilis outbreak which occurred in the county during the 1990s.

The entirety of Rockdale County is located in the Upper Ocmulgee River sub-basin of the Altamaha River basin.

The county features an interchange of I-20 and SR 20. In order to ease potential motorist confusion, the concurrency of SR 20 & 138 is usually called just "138".

The county features an interchange of I-20 and SR 20. In order to ease potential motorist confusion, the concurrency of SR 20 & 138 is usually called just "138".

All content from Kiddle encyclopedia articles (including the article images and facts) can be freely used under Attribution-ShareAlike license, unless stated otherwise. Cite this article:
Rockdale County, Georgia Facts for Kids. Kiddle Encyclopedia.