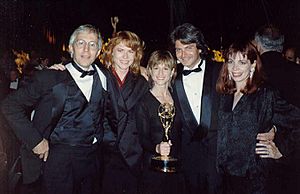 Holly Hunter (born 20 March 1958) is an American actress. She was born in Conyers, Georgia. Hunter starred in The Piano for which she won the Academy Award, BAFTA and Golden Globe Award.

Hunter was also nominated for Oscars for her roles in Broadcast News, The Firm, and Thirteen. She has won two Emmy Awards.

Hunter has acted in many other movies. They include Copycat, Living Out Loud, O Brother, Where Art Thou?, Home for the Holidays, The Incredibles, Thirteen, and Batman v Superman: Dawn of Justice.

Hunter's most outstanding television series was for the drama series Saving Grace (TV series), for which she won the Grace Allen Award, and was nominated for seven other awards.

All content from Kiddle encyclopedia articles (including the article images and facts) can be freely used under Attribution-ShareAlike license, unless stated otherwise. Cite this article:
Holly Hunter Facts for Kids. Kiddle Encyclopedia.