Frances Louise McDormand (born Cynthia Ann Smith; June 23, 1957) is an American actress and producer. McDormand is the recipient of numerous accolades, including four Academy Awards, two Golden Globe Awards, three BAFTA Awards, two Emmy Awards, and a Tony Award, one of the few performers to achieve the "Triple Crown of Acting." One of the most acclaimed actresses of her generation, she is known for her portrayals of quirky, headstrong female characters. Although primarily recognized for her roles in small-budget independent films, McDormand's worldwide box office gross exceeds $2.2 billion helped by her appearances in the Transformers: Dark of the Moon (2011) and Madagascar 3: Europe's Most Wanted (2012).

McDormand was educated at Bethany College and Yale University. She has starred in a number of Coen Brothers’ films, including Blood Simple (1984), Raising Arizona (1987), Fargo (1996), The Man Who Wasn't There (2001), Burn After Reading (2008), and Hail, Caesar! (2016). For her portrayal of Marge Gunderson in Fargo, McDormand won the Academy Award for Best Actress. Her other film roles include Mississippi Burning (1988), Almost Famous (2000), and North Country (2005), all of which earned her nominations for the Academy Award for Best Supporting Actress. In 2017, she starred as a hardened woman seeking justice for her daughter's murder in the crime-drama film Three Billboards Outside Ebbing, Missouri, which won her a second Academy Award for Best Actress. In 2020, she starred in the acclaimed independent drama film Nomadland, winning a 3rd Academy Award for Best Actress and, as a co-producer, the Best Picture category. Her Best Actress win for Nomadland made her the fourth actress to win three Academy Awards for acting, after Katharine Hepburn, Ingrid Bergman, and Meryl Streep, who have four, three, and three Academy Awards, respectively. With her win in the Best Picture category as well, she is the first woman and only the fifth person overall to take home Oscars for acting and producing, and the first person to do so on the same night. 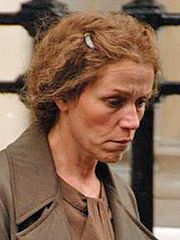 All content from Kiddle encyclopedia articles (including the article images and facts) can be freely used under Attribution-ShareAlike license, unless stated otherwise. Cite this article:
Frances McDormand Facts for Kids. Kiddle Encyclopedia.