Monessen is a city in Westmoreland County, Pennsylvania, United States. The population was 7,720 at the 2010 census. In 1940, 20,257 people lived there. In 1990 the population was 13,026. Monessen is the southwestern-most municipality of Westmoreland County. Steel-making was a prominent industry in Monessen, which was a Rust Belt borough in the "Mon Valley" of southwestern Pennsylvania that became a third-class city in 1921. Monessen is part of the Pittsburgh metropolitan area, the Rivers of Steel National Heritage Area, as well as the Laurel Highlands.

Monessen, named for the Monongahela River and the industrial German city of Essen, was created by land speculators fairly late in the history of the Mon Valley, after neighboring towns had already been settled. The East Side Land Company bought land from various farmers, laid out the streets, and then sold the lots to prospective residents and employers. James M. Schoonmaker, who had made his fortune in coke, owned a controlling interest in the land company. Other investors in the land company who were also immortalized in street names include Philander C. Knox, James H. Reed, H. Sellers McKee, George O. Morgan, and George B. Motheral. In May 1897, National Tin Plate Company, founded by William Donner, began building its mill, thus becoming Monessen’s first employer. Sales of lots began on July 27, 1897, for the general public and other employers. Monessen became a borough on September 3, 1898.

While there were many companies operating in Monessen, the largest employer was Pittsburgh Steel Company, later renamed Wheeling-Pittsburgh Steel. In a practice that is shocking by today’s standards (and not limited to Monessen), pay was determined by ethnic background. For example, a Welsh immigrant would be paid more than an Italian immigrant. A normal workweek was 84 hours (7 days times 12 hours). Employers did not adopt the eight-hour workday until the 1920s.

In the 1960s and afterwards, the region’s manufacturers, especially the steel industry, found it harder to compete, leading to an employment cutbacks. In 1972, the closure of Page Steel and Wire Company was a major setback to the city. A far greater blow to Monessen occurred when its largest employer, Wheeling-Pittsburgh Steel, closed nearly all its Monessen operations in 1986. The company’s rail mill did not close until March 1987. The mill’s closure marked the end of an era in Monessen's history.

Monessen is currently trying to revitalize itself. The city has made efforts for several years to clean up abandoned properties in hopes of revitalizing the city. In January 2010 the first female mayor, Mary Jo Smith was sworn in at the Monessen Municipal Building. In 2013, Mayor Lou Mavrakis revealed the city has at least $8 million in long term debt which requires the city to budget $400,000 a year of its $4 million budget to payments on its debt.

Older residents understand that the steel mills will not be returning to the area. Younger residents barely remember the mills or are even unaware of the city's industrial past. "I remember when they tore the blast furnaces down," in the mid 1990s said one resident. "It was a big deal. My dad took me. I was 5."

The Charleroi-Monessen Bridge was listed on the National Register of Historic Places in 1988.

Monessen is part of the Pittsburgh Metropolitan Statistical Area; otherwise, known as the Greater Pittsburgh Region.

The climate in this area is characterized by hot, humid summers and generally mild to cool winters. According to the Köppen Climate Classification system, Monessen has a humid continental climate, abbreviated "Cfa" on climate maps. 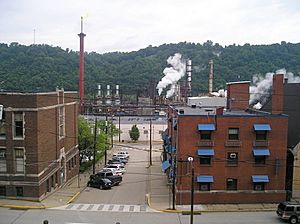 View of downtown towards the coke works in Monessen, 2008

Residents of Monessen may attend the local public schools operated by Monessen City School District, which provides taxpayer-funded preschool, full-day kindergarten, and grades through 12th. The district's enrollment declined to 875 students in preschool through 12th grade in 2013. Monessen City School District ranked 475th out of 500 public schools for academic achievement in 2013. The district was ranked 97th out of 104 western Pennsylvania school districts in 2013 by the Pittsburgh Business Times.

Monessen residents may also apply to attend any of the commonwealth's 13 public cyber charter schools at no additional cost to the parents. The residents public school district is required to pay the charter school and cyber charter school tuition for residents who attend these schools. By commonwealth law, if the district provides transportation for its own students, then it must provide transportation to any school that lies within ten miles of its borders. Residents may also seek admission for their school-aged child to any other public school district. When accepted for admission, the student's parents are responsible for paying an annual tuition fee set by the Pennsylvania Department of Education. In 2012, the tuition fees for Monessen City School District were: elementary school - $10,109; high school - $11,837.

Westmoreland Intermediate Unit #7 provides a wide variety of services to children living in its region, which includes Monessen. Services including early screening, special educations services, speech and hearing therapy and driver's education are available. Services for children during the preschool years are provided without cost to their families when the child is determined to meet eligibility requirements.

Monessen City residents have access to Agape Day Treatment Program and the Westmoreland County Community College. Another school is Douglas Education Center. Although it only awards associate degrees, the divisions housing George A. Romero's Film School and Tom Savini's Special Effects Makeup program are very widely attended, the latter enrolling 150 students. These students also rent apartments in town, allowing agents to renovate buildings to gain income. However, most of the students graduate and move away, adding nothing to the permanent tax base.

The Monessen Public Library is located at 326 Donner Avenue.

All content from Kiddle encyclopedia articles (including the article images and facts) can be freely used under Attribution-ShareAlike license, unless stated otherwise. Cite this article:
Monessen, Pennsylvania Facts for Kids. Kiddle Encyclopedia.