Das Rheingold (The Rhinegold) is an opera by Richard Wagner. It is the first of the four operas that together tell a story called Der Ring des Nibelungen (The Ring of the Nibelung).

Das Rheingold is an opera in one act, divided into four scenes. It is a very long act, lasting 2 ½ hours, but it is normally played without an interval as the music is continuous, even between the scenes.

The characters in the opera are Gods, Giants, Nibelungs and the Rhinedaughters. The Nibelungs are a race of dwarfs. They are cunning and evil and live underneath the surface of the earth.

The first scene takes place in the river Rhine where the three Rhinemaidens: Woglinde, Wellgunde and Flosshilde, are guarding the precious Rhine gold. Alberich, an evil Nibelung, arrives and tries to catch the Rhinemaidens. From what they say Alberich learns that the gold they are guarding has magic powers. Alberich wants the gold, but the Rhinemaidens say that anyone who wants to have it has to renounce (give up) love. They think that Alberich will not do that because he is very fond of girls, but Alberich does renounce love and so he gets the gold.

The second scene takes place in Valhalla, which is where the gods live. Wotan, the chief god, is there with his wife Fricka. Two giants have been building an enormous castle for the gods. Wotan has promised them that he would pay them for their work by giving them Freia, the Goddess of Youth and Beauty. Fricka is worried about the promise that Wotan has made, but Wotan tells his wife that he is not going to keep his promise. He thinks he can find a way of tricking the giants. Freia enters. She is frightened because the giants are coming for her.

The giants, Fasolt and Fafner, enter. They want to have Freia in payment for having built the castle. The problem for the gods is that Freia has a garden in which she grows golden apples. If the gods no longer have these golden apples they will grow old and die. Wotan does not know what to do.

Loge, the god of fire, enters. Wotan is cross with Loge for not having found something else to pay the giants with. Loge says he has been all over the world looking for something. He tells everyone that the gold from the Rhine has magic power, and how Alberich renounced love so that he could steal it from the Rhinemaidens. He tells them that a ring can be made from the gold, and that whoever has the ring will have power over all the world. The giants hear what Loge is saying and decide that they want the gold instead of Freia. They take Freia as hostage, saying that they will be back later to collect the gold. If they do not get it then they will keep Freia forever.

Wotan asks Loge how they are going to get the gold. Loge tells them that they should steal it from Alberich. After all, Alberich stole it from the Rhinemaidens, so it does not belong to him. Wotan and Loge go down below the earth to the Nibelungs. 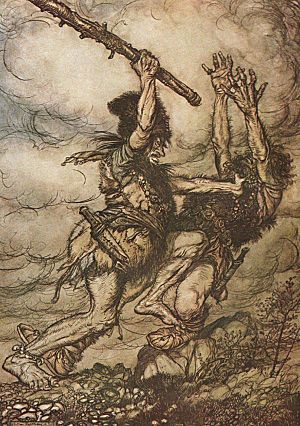 Underneath the earth Alberich is forcing the Nibelungs to work for him. They are hammering at the anvil. Mime, who is Alberich’s brother, has used some of the gold to make a helmet. This helmet is called the Tarn helmet. Anyone who wears it can change their shape or become invisible. Alberich treats his brother very cruelly.

Wotan and Loge tease Alberich. Alberich asks them what they want so that he can be free. Wotan demands the gold. The Nibelungs pile the gold up. Alberich is not too worried, because he still has the ring which gives him magic power. He thinks he can use this power later to get the gold back. Wotan sees the ring on Alberich’s finger. He tells him to give him the ring. Alberich is terrified, but Wotan tears it from his finger. Before Alberich goes he puts a curse on the ring. Whoever has had the ring will die. This is very important to the whole story of the four operas.

The two giants appear with Freia. The gods have become very weak, but once Freia returns they start to become stronger again. Wotan tells the giants they can have their gold. The giants say that they must pile up the gold in front of Freia until they cannot see her. They do this, but the giants say there is still a tiny hole through which they can see Freia’s eye. They see the ring on Wotan’s finger and tell him to put it in the hole. Wotan says they can have anything they want but not the ring.

Erda appears. Erda is the Earth Goddess. She is very wise. She reminds Wotan that there is a curse on the ring and that he should quickly give the ring to the giants. Wotan has no choice. He puts the ring in the hole. Now the giants are happy.

Immediately, however, the giants start to argue with one another and Fafner kills Fasolt. The curse on the ring is working. Loge tells Wotan he was wise to give up the ring. However, Fricka is still worried because Wotan did have the ring.

Donner, the god of Thunder, enters and swings his hammer. There is a flash of lightning and a crash of thunder. The clouds vanish, a rainbow makes a bridge to Valhalla and the gods enter Valhalla. The Rhinemaidens are heard crying out to Wotan to give the gold back, but Wotan takes no notice. The gods are now at the height of their glory. We shall see, at the end of the fourth opera, that the curse will catch up with them and that they, too, will die.

The music of Das Rheingold is beautifully written to fit every person and every situation. The famous opening starts with a low chord of E flat which describes the bottom of the river Rhine. At first the notes of the chords are held on, then gradually a ripple of broken chords and arpeggios suggest the ripples of the water. The harps make a sound like the waves. The harmony just consists of the same E flat chord for the first 136 bars until the Rhine Maidens start to sing.

Each character in the opera has his own musical leitmotif which can change and combine to show their changing moods and situations. There are big, heavy chords for the giants, creepy chromatic winding music for Loge, the god of fire, who is supposed to be very crafty, dignified music for the Earth Goddess Erda etc. There is a special leitmotif for the curse, which is heard at various times in all four operas.

Wagner actually called "Das Rheingold" a "prologue" to the other three operas, which he saw as the main operas of the cycle.

All content from Kiddle encyclopedia articles (including the article images and facts) can be freely used under Attribution-ShareAlike license, unless stated otherwise. Cite this article:
Das Rheingold Facts for Kids. Kiddle Encyclopedia.