An anvil is a hard piece of metal which is used as a workbench when making things out of iron or steel. An anvil is used by a blacksmith when he needs to hammer hot iron to bend it into the shape he wants. A blacksmith can make new shoes for horses. 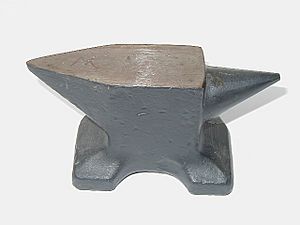 Anvils were known in the Bronze Age and possibly earlier. They were used in Ancient Greece and Ancient Egypt. They are still in use today, although not nearly as much as 100 years ago when there were many more horses.

Anvils are extremely heavy. They are made in different sizes. The 17th century writer John Bunyan was a tinker (someone who mends pots and pans). He walked around the villages of Bedfordshire with a small anvil and a few tools on his back. His anvil was wedge-shaped, so that he could knock it into the ground when he needed to do a repair. His anvil is now in the John Bunyan museum in Bedford. 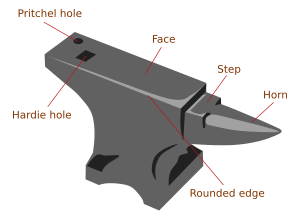 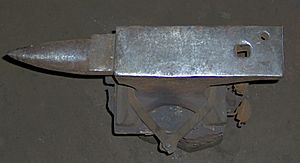 A top view of a well used London pattern anvil

The primary work surface of the anvil is known as the face. It is generally made of hardened steel and should be flat and smooth with rounded edges for most work. Any marks on the face will be transferred to the work. Also, sharp edges tend to cut into the metal being worked and may cause cracks to form in the workpiece. The face is hardened and tempered to resist the blows of the smith's hammer, so the anvil face does not deform under repeated use. A hard anvil face also reduces the amount of force lost in each hammer blow. Hammers, tools, and work pieces of hardened steel should never directly strike the anvil face with full force, as they may damage it; this can result in chipping or deforming of the anvil face.

The horn of the anvil is a conical projection used to form various round shapes and is generally unhardened steel or iron. The horn is used mostly in bending operations. It also is used by some smiths as an aid in "drawing down" stock (making it longer and thinner). Some anvils, mainly European, are made with two horns, one square and one round. Also, some anvils are made with side horns or clips for specialized work.

The step is that area of the anvil between the "horn" and the "face". It is soft and is used for cutting; its purpose is to prevent damaging the steel face of the anvil by conducting such operations there and so as not to damage the cutting edge of the chisel, though many smiths shun this practice as it will damage the anvil over time.

The hardie hole is a square hole into which specialized forming and cutting tools, called Hardy tools, are placed. It is also used in punching and bending operations.

The pritchel hole is a small round hole that is present on most modern anvils. Some anvils have more than one. It is used mostly for punching. At times, smiths will fit a second tool to this hole to allow the smith more flexibility when using more than one anvil tool. 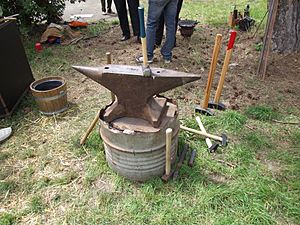 Anvil of a farrier

An anvil needs to be placed upon a sturdy base made from an impact and fire resistant material. It requires being fastened firmly to the base, so it will not move when struck with a hammer. A loose anvil is extremely unsafe, as it can fall off the base and is an ineffective forging tool. Common methods of attaching an anvil are spikes, chains, steel or iron straps, clips, bolts where there are holes provided, and cables. A smith would use whatever was at hand, as long as it held the anvil firmly in place. The anvil is placed as near to the forge as is convenient, generally no more than one step from the forge to prevent heat loss in the work piece.

The most common base traditionally was a hard wood log or large timber buried several feet into the floor of the forge shop floor. This was done to make the anvil immobile when heavy forging and bending were done upon the anvil. In the industrial era cast iron bases became available. They had the advantage of adding additional weight to the anvil, making it more stable while making the anvil movable. These bases are highly sought after by collectors today. When concrete became widely available, there was a trend to make steel reinforced anvil bases by some smiths, though this practice has largely been abandoned. In more modern times many anvils have been placed upon bases fabricated from steel, often a short thick section of a large I-Beam. In addition, bases have been made from dimensional lumber bolted together to form a large block or steel drums full of oil-saturated sand to provide a damping effect. In recent times tripod bases of fabricated steel have become popular with some smiths.

Use as a musical instrument 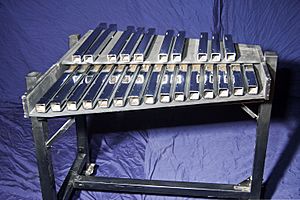 A chromatic set of tuned anvil

The anvil has sometimes been used as a percussion instrument because it makes a very loud sound when hit by the hammer. Usually musicians use a metal bar mounted on a sound-box. This sounds just as good as a real anvil (which would be very heavy to carry around).

Verdi wrote some famous music called the Anvil Chorus in his opera Il Trovatore. Wagner asked for 18 anvils in Das Rheingold in the scene which takes place below the earth where the Nibelungs are working at their forges. Johann Strauss II wrote an Anvil Polka, Varèse used an anvil in Ionisation, Walton uses an anvil in Belshazzar’s Feast and there is an anvil in the orchestra in Howard Shore's music for The Lord of the Rings movie trilogy.

All content from Kiddle encyclopedia articles (including the article images and facts) can be freely used under Attribution-ShareAlike license, unless stated otherwise. Cite this article:
Anvil Facts for Kids. Kiddle Encyclopedia.