The crab-eating macaque (Macaca fascicularis), also known as the long-tailed macaque, is a cercopithecine primate native to Southeast Asia. It has a long history alongside humans; they have been alternately seen as agricultural pests and sacred animals in some temples.

The crab-eating macaque lives in matrilineal social groups with a female dominance hierarchy, and male members leave the group when they reach puberty. They are opportunistic omnivores and have been documented using tools to obtain food. The crab-eating macaque is a known invasive species and a threat to biodiversity in several locations. The significant overlap in macaque and human living space has resulted in greater habitat loss.

Macaca comes from the Portuguese word macaco, which was derived from makaku, a Fiot (West African language) word (kaku means monkey in Fiot). The specific epithet fascicularis is Latin for a small band or stripe. Sir Thomas Raffles, who gave the animal its scientific name in 1821, did not specify what he meant by the use of this word.

In Indonesia and Malaysia, M. fascicularis and other macaque species are known generically as kera, possibly because of their high-pitched cries. 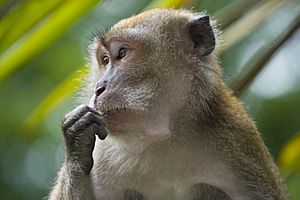 The body length of the adult, which varies among subspecies, is with relatively short arms and legs. Males are considerably larger than females. The tail is longer than the body, which is used for balance when they jump distances. The upper parts of the body are dark brown with light golden brown tips. The under parts are light grey with a dark grey/brown tail.

Crab-eating macaques have backwards-directed crown hairs which sometimes form short crests on the mid-line. Their skin is black on their feet and ears, whereas the skin on the muzzle is a light grayish pink color. The eyelids often have prominent white markings and sometimes there are white spots on the ears. Males have a characteristic mustache and cheek whiskers, while females have only cheek whiskers. Crab-eating macaques have a cheek pouch which they use to store food while foraging. 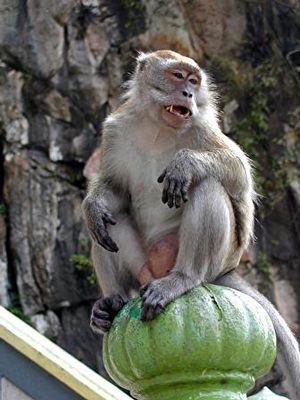 Macaque baring its teeth - often an indication of aggression 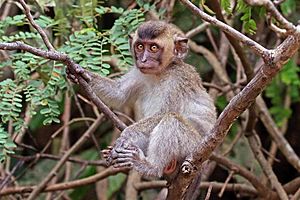 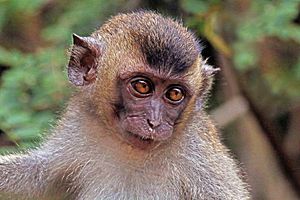 Macaques live in social groups that contain three to 20 females, their offspring, and one or many males. The groups usually have fewer males than females. In social groups of macaques, a clear dominance hierarchy is seen among females. These ranks remain stable throughout the female’s lifetime and also can be sustained through generations of matrilines. Females have their highest birth rates around 10 years of age and completely stop bearing young by age 24.

Despite their name, crab-eating macaques typically do not consume crabs as their main food source; rather, they are opportunistic omnivores, eating a variety of animals and plants. Although fruits and seeds make up 60 - 90% of their diet, they also eat leaves, flowers, roots, and bark. They sometimes prey on vertebrates (including bird chicks, nesting female birds, lizards, frogs, and fish), invertebrates, and bird eggs. In Indonesia, the species has become a proficient swimmer and diver for crabs and other crustaceans in mangrove swamps.

The crab-eating macaque can become dependant on living off human resources. They are known to feed in cultivated fields on young dry rice, cassava leaves, rubber fruit, taro plants, coconuts, mango's, and other crops, often causing significant losses to local farmers. In villages, towns, and cities, they frequently take food from garbage cans and refuse piles. The species can become unafraid of humans in these conditions, which can lead to macaques directly taking food from people, both passively and aggressively.

In Thailand and Myanmar, crab-eating macaques use stone tools to open nuts, oysters, and other bivalves, and various types of sea snails, along the Andaman sea coast and offshore islands.

Another instance of tool use is washing and rubbing foods such as sweet potatoes, cassava roots, and papaya leaves before consumption. Crab-eating macaques either soak these foods in water or rub them through their hands as if to clean them. They also peel the sweet potatoes, using their incisors and canine teeth. Adolescents appear to acquire these behaviors by observational learning of older individuals.

The crab-eating macaque lives in a wide variety of habitats, including primary lowland rainforests, disturbed and secondary rainforests, shrubland, and riverine and coastal forests of nipa palm and mangrove. They also easily adjust to human settlements; they are considered sacred at some Hindu temples and on some small islands, but are pests around farms and villages.

All content from Kiddle encyclopedia articles (including the article images and facts) can be freely used under Attribution-ShareAlike license, unless stated otherwise. Cite this article:
Crab-eating Macaque Facts for Kids. Kiddle Encyclopedia.