The hammers inside pianos are at Hammer (piano) 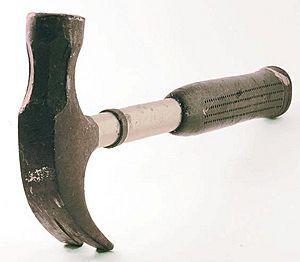 A hammer is a tool for putting nails into objects such as wood. It has a long handle, and a tip with a flat end for hitting nails. The most common type of hammer (sometimes called a claw hammer) has a curved end (on the other side of the hitting end) for pulling nails out. 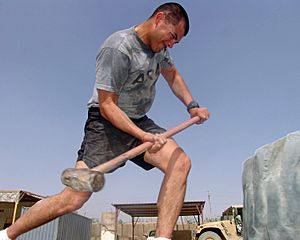 A sledgehammer is a hammer that has a longer shaft, and a more massive head. The user can swing it with two hands and apply more force.

The parts of a hammer are the face, head (includes the bell and neck, which are not labeled), eye (where the handle fits into), peen (also spelled pein and pane). The side of a hammer is the cheek and some hammers have straps that extend down the handle for strength. Shown here are: A. Ball-peen hammer B. Straight-peen hammer C. Cross-peen hammer 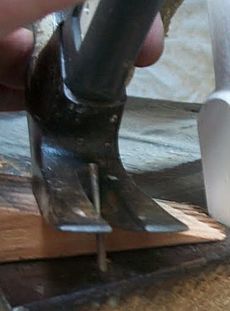 The claw of a carpenter's hammer is frequently used to remove nails.

A large hammer-like tool is a maul (sometimes called a "beetle"), a wood- or rubber-headed hammer is a mallet, and a hammer-like tool with a cutting blade is usually called a hatchet. The essential part of a hammer is the head, a compact solid mass that is able to deliver a blow to the intended target without itself deforming. The impacting surface of the tool is usually flat or slightly rounded; the opposite end of the impacting mass may have a ball shape, as in the ball-peen hammer. Some upholstery hammers have a magnetized face, to pick up tacks. In the hatchet, the flat hammer head may be secondary to the cutting edge of the tool.

The impact between steel hammer heads and the objects being hit can create sparks, which may ignite flammable or explosive gases. These are a hazard in some industries such as underground coal mining (due to the presence of methane gas), or in other hazardous environments such as petroleum refineries and chemical plants. In these environments, a variety of non-sparking metal tools are used, primarily made of aluminium or beryllium copper. In recent years, the handles have been made of durable plastic or rubber, though wood is still widely used because of its shock-absorbing qualities and repairability. 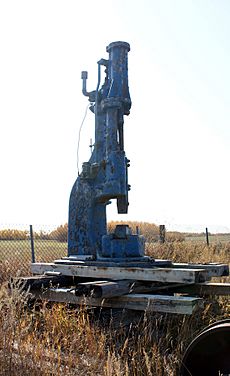 Mechanically-powered hammers often look quite different from the hand tools, but nevertheless, most of them work on the same principle. They include:

In professional framing carpentry, the manual hammer has almost been completely replaced by the nail gun. In professional upholstery, its chief competitor is the staple gun.

Tools used in conjunction with hammers

All content from Kiddle encyclopedia articles (including the article images and facts) can be freely used under Attribution-ShareAlike license, unless stated otherwise. Cite this article:
Hammer Facts for Kids. Kiddle Encyclopedia.