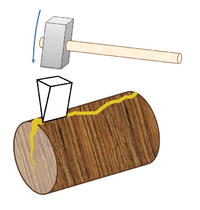 Splitting wood with a hammer and wedge

A wedge is a simple machine used mainly to separate two objects. A wedge as a tool is used to push two things apart such as the blade of a knife does when it cuts wood. A wedge can also be used to lift an object or hold an object in place. The mechanical advantage of a wedge depends on the ratio of its length to its thickest part.

The origin of the wedge is unknown, because it has been in use as early as the Stone Age. Circa 3000 BC, in Ancient Egypt quarries, bronze wedges were used to break away blocks of rock used for construction. Wood wedges, that swelled after being wet, were also used. Some Native American tribes used antler wedges as a means of splitting and working wood to make canoes, houses, and other wood objects.

A wedge used to lift a block of stone

Examples for separating and lifting

Examples include axes, splitting mauls, and splitting wedges. Wedges can also be used to lift heavy objects, or finely adjust the height of objects, essentially separating them from the surface they rest on. These may also be referred to as shims. Knives, scissors, chisels, and even teeth can sometimes be used as wedges, however, they are more fundamentally cutting implements.

Wedges can also be used to hold objects in place, such as engine parts (poppet valves), bicycle parts (stems and eccentric bottom brackets), and doors.

A door stop (door wedge) is a wedge, and its main function is to generate friction between the bottom of the door and the ground.

A fork or nails can also be considered a type of wedge. While a nail will slice into wood when hammered, a bolt will not be pushed in. This is because a nail is a wedge and a bolt is not. A nail is tapered to a point at its end, then gets thicker farther up towards the head of the nail.

The more acute the angle of the wedge, the more mechanical advantage it will have.

Despite this, one reason that many splitting wedges have a wide angle is that an elastic material, such as wood, will bind a narrow wedge more readily than a wide wedge. This is why splitting mauls have a much larger angle than an axe.

All content from Kiddle encyclopedia articles (including the article images and facts) can be freely used under Attribution-ShareAlike license, unless stated otherwise. Cite this article:
Wedge (mechanics) Facts for Kids. Kiddle Encyclopedia.