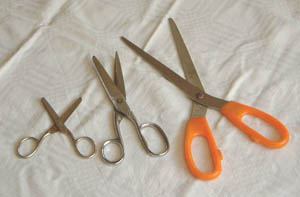 Scissors are used for sewing, in the kitchen, and for paper.

Scissors are a tool used for cutting thin material like:

Scissors can be made for left-handed or right-handed people. Using scissors made for the wrong hand is very hard for most people.

There are many kinds of scissors used for cutting different materials and shapes.

Among specialized scissors and shears used for different purposes are:

All content from Kiddle encyclopedia articles (including the article images and facts) can be freely used under Attribution-ShareAlike license, unless stated otherwise. Cite this article:
Scissors Facts for Kids. Kiddle Encyclopedia.