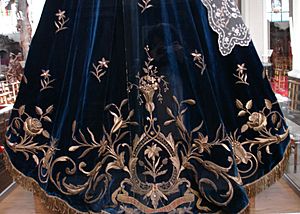 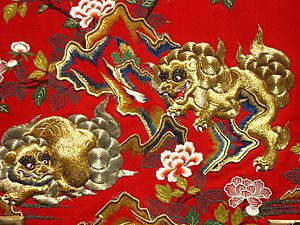 Embroidery is the art of decorating fabric or other materials with designs stitched in strands of thread or yarn using a needle. Embroidery may also incorporate other materials such as metal strips, pearls, beads, quills, and sequins. Sewing machines can be used to create machine embroidery. 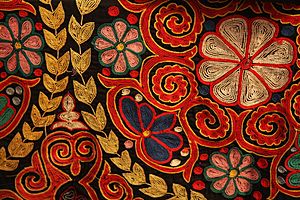 Traditional embroidery in chain stitch on a Kazakh rug, contemporary. 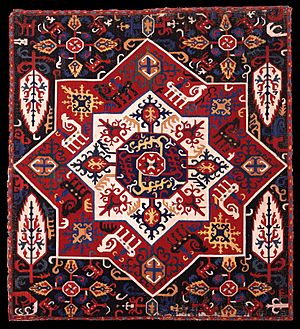 The process used to tailor, patch, mend and reinforce cloth fostered the development of sewing techniques, and the decorative possibilities of sewing led to the art of embroidery. Indeed, the remarkable stability of basic embroidery stitches has been noted:

It is a striking fact that in the development of embroidery ... there are no changes of materials or techniques which can be felt or interpreted as advances from a primitive to a later, more refined stage. On the other hand, we often find in early works a technical accomplishment and high standard of craftsmanship rarely attained in later times.

The art of embroidery has been found world-wide and several early examples have been found. Works in China have been dated to the Warring States period (5th–3rd century BC). In a garment from Migration period Sweden, roughly 300–700 AD, the edges of bands of trimming are reinforced with running stitch, back stitch, stem stitch, tailor's buttonhole stitch, and whip-stitching, but it is uncertain whether this work simply reinforced the seams or should be interpreted as decorative embroidery.

Ancient Greek mythology has credited the goddess Athena with passing down the art of embroidery along with weaving, leading to the famed competition between herself and the mortal Arachne.

Depending on time, location and materials available, embroidery could be the domain of a few experts or a wide-spread, popular technique. This flexibility led to a variety of works, from the royal to the mundane.

Elaborately embroidered clothing, religious objects, and household items often were seen as a mark of wealth and status, as in the case of Opus Anglicanum, a technique used by professional workshops and guilds in medieval England. In 18th-century England and its colonies, samplers employing fine silks were produced by the daughters of wealthy families. Embroidery was a skill marking a girl's path into womanhood as well as conveying rank and social standing.

Conversely, embroidery is also a folk art, using materials that were accessible to nonprofessionals. Examples include Hardanger from Norway, Merezhka from Ukraine, Mountmellick embroidery from Ireland, Nakshi kantha from Bangladesh and West Bengal, and Brazilian embroidery. Many techniques had a practical use such as Sashiko from Japan, which was used as a way to reinforce clothing. 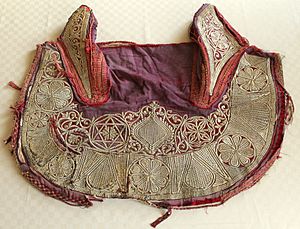 Embroidery was an important art in the Medieval Islamic world. The 17th-century Turkish traveler Evliya Çelebi called it the "craft of the two hands". Because embroidery was a sign of high social status in Muslim societies, it became widely popular. In cities such as Damascus, Cairo and Istanbul, embroidery was visible on handkerchiefs, uniforms, flags, calligraphy, shoes, robes, tunics, horse trappings, slippers, sheaths, pouches, covers, and even on leather belts. Craftsmen embroidered items with gold and silver thread. Embroidery cottage industries, some employing over 800 people, grew to supply these items.

In the 16th century, in the reign of the Mughal Emperor Akbar, his chronicler Abu al-Fazl ibn Mubarak wrote in the famous Ain-i-Akbari: "His majesty (Akbar) pays much attention to various stuffs; hence Irani, Ottoman, and Mongolian articles of wear are in much abundance especially textiles embroidered in the patterns of Nakshi, Saadi, Chikhan, Ari, Zardozi, Wastli, Gota and Kohra. The imperial workshops in the towns of Lahore, Agra, Fatehpur and Ahmedabad turn out many masterpieces of workmanship in fabrics, and the figures and patterns, knots and variety of fashions which now prevail astonish even the most experienced travelers. Taste for fine material has since become general, and the drapery of embroidered fabrics used at feasts surpasses every description."

The development of machine embroidery and its mass production came about in stages in the Industrial Revolution. The earliest machine embroidery used a combination of machine looms and teams of women embroidering the textiles by hand. This was done in France by the mid-1800s. The manufacture of machine-made embroideries in St. Gallen in eastern Switzerland flourished in the latter half of the 19th century. 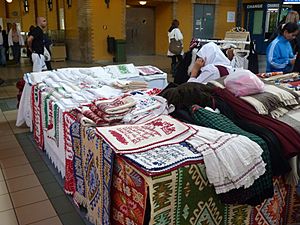 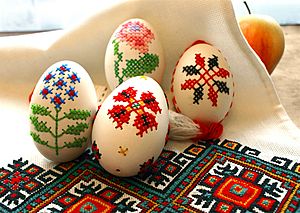 Embroidery can be classified according to what degree the design takes into account the nature of the base material and by the relationship of stitch placement to the fabric. The main categories are free or surface embroidery, counted embroidery, and needlepoint or canvas work.

In free or surface embroidery, designs are applied without regard to the weave of the underlying fabric. Examples include crewel and traditional Chinese and Japanese embroidery. 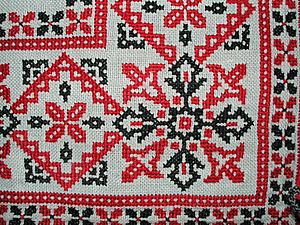 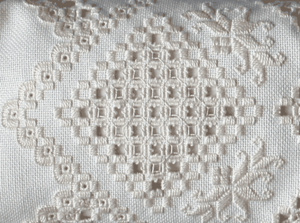 While similar to counted thread in regards to technique, in canvas work or needlepoint, threads are stitched through a fabric mesh to create a dense pattern that completely covers the foundation fabric. Examples of canvas work include bargello and Berlin wool work.

Embroidery can also be classified by the similarity of appearance. In drawn thread work and cutwork, the foundation fabric is deformed or cut away to create holes that are then embellished with embroidery, often with thread in the same color as the foundation fabric. When created with white thread on white linen or cotton, this work is collectively referred to as whitework. However, whitework can either be counted or free. Hardanger embroidery is a counted embroidery and the designs are often geometric. Conversely, styles such as Broderie anglaise are similar to free embroidery, with floral or abstract designs that are not dependent on the weave of the fabric. 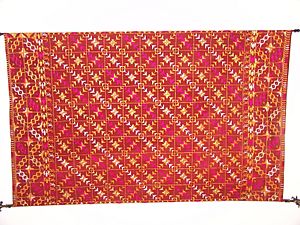 Phulkari from the Punjab region of India. Phulkari embroidery, popular since at least the 15th century, is traditionally done on hand-spun cotton cloth with simple darning stitches using silk floss. 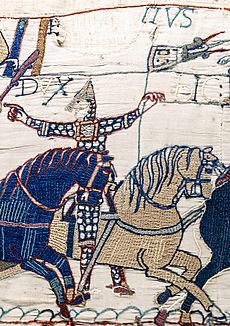 Surface embroidery techniques such as chain stitch and couching or laid-work are the most economical of expensive yarns; couching is generally used for goldwork. Canvas work techniques, in which large amounts of yarn are buried on the back of the work, use more materials but provide a sturdier and more substantial finished textile.

In both canvas work and surface embroidery an embroidery hoop or frame can be used to stretch the material and ensure even stitching tension that prevents pattern distortion. Modern canvas work tends to follow symmetrical counted stitching patterns with designs emerging from the repetition of one or just a few similar stitches in a variety of hues. In contrast, many forms of surface embroidery make use of a wide range of stitching patterns in a single piece of work. 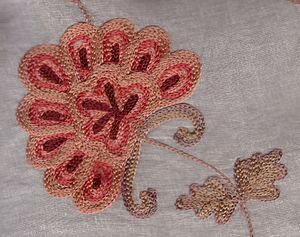 Contemporary embroidery is stitched with a computerized embroidery machine using patterns digitized with embroidery software. In machine embroidery, different types of "fills" add texture and design to the finished work. Machine embroidery is used to add logos and monograms to business shirts or jackets, gifts, and team apparel as well as to decorate household linens, draperies, and decorator fabrics that mimic the elaborate hand embroidery of the past.

There has also been a development in free hand machine embroidery, new machines have been designed that allow for the user to create free-motion embroidery which has its place in textile arts, quilting, dressmaking, home furnishings and more.

All content from Kiddle encyclopedia articles (including the article images and facts) can be freely used under Attribution-ShareAlike license, unless stated otherwise. Cite this article:
Embroidery Facts for Kids. Kiddle Encyclopedia.