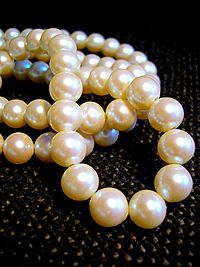 Pearls are made of a kind of material made by mollusks, like oysters. Pearls are small and often white but sometimes in pale colors or even black. They are often round, but sometimes half-round, oval, or in different shapes. Pearls are often used for jewelry. The pearl is the birthstone for the month June.

How a natural pearl is formed

A natural pearl is formed when nacre-producing cells are displaced from the mantle tissue of an oyster. These cells are genetically programmed to produce nacre, the substance that lines the inner sides of an oyster's shell. When the cells become displaced, often by a boring parasite or damage to the outer shell, they continue to do what they are programmed to do -- produce nacre and form a pearl.

They can be very tiny (as tiny as a peppercorn) or quite big (as big as a human's fist). The world's largest pearl, found in 1934 and called the Pearl of Lao-tze, is about the size of a basketball.

All content from Kiddle encyclopedia articles (including the article images and facts) can be freely used under Attribution-ShareAlike license, unless stated otherwise. Cite this article:
Pearl Facts for Kids. Kiddle Encyclopedia.