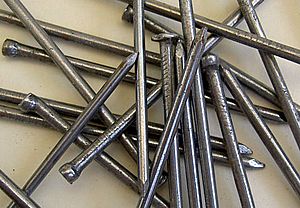 Nails
Not to be confused with Fingernail.

A nail is a metal object with a flat head and a long, sharp tip. A hammer or nail gun is used to put it into another object. It is often used to join two objects together.

The history of the nail came in three periods:

Nails date back at least to Ancient Egypt – bronze nails found in Egypt have been dated 3400 BC. The Bible has references to nails. King David gave iron to make nails for what would become Solomon's Temple.

The Romans made extensive use of nails. The Roman army left behind seven tons of nails when it evacuated the fortress of Inchtuthil in Perthshire, Scotland, in 86 or 87 AD.

All content from Kiddle encyclopedia articles (including the article images and facts) can be freely used under Attribution-ShareAlike license, unless stated otherwise. Cite this article:
Nail Facts for Kids. Kiddle Encyclopedia.