Siegfried is an opera by Richard Wagner. It is the third of the four operas that together tell a story called Der Ring des Nibelungen (The Ring of the Nibelung). The story continues from the end of the second opera which was called Die Walküre.

The first performance of Siegfried took place when the whole Ring cycle (all four operas) were performed in the Festspielhaus in Bayreuth on 16 August 1876. 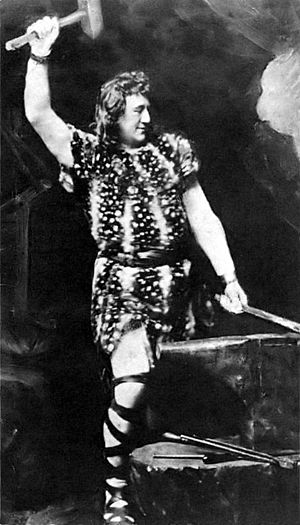 The first part of the opera takes place in a forest where the giant Fafner lives. He has used the magic tarn helmet to change himself into a dragon so that he can guard the treasure of the gold and the ring (we saw how he got the treasure in the first opera, Das Rheingold). Siegfried, who was not yet born at the end of the second opera, Die Walküre, is now a young lad. He has been brought up by the dwarf Mime, Alberich's brother. Mime is just as horrible as his brother.

Mime is hammering away at the anvil, trying to repair the sword that was smashed to pieces by Wotan in Act Two of Die Walküre. He wants to make the bits into a strong sword, but every time he thinks he has managed it Siegfried picks up the sword and breaks it with his strength. The reason that Mime wants to make the sword is so that he can give it to Siegfried (who is obviously the hero who is meant to have the sword in the end) and tell him to fight the dragon. Then Mime will be able to get the ring from him so that he can have power over all the world. When Siegfried enters he brings a bear from the forest. The bear chases Mime and Siegfried laughs. Then he lets the bear go free.

Mime says to Siegfried that he should be thankful to him for looking after him as a child and bringing him up. He has never told Siegfried who his parents were (they were Siegmund and Sieglinde, both now dead). Siegfried does not understand anything about how babies are born. He has never seen a woman before. He only knows Mime who is pretending to be is father. Siegfried has noticed that young birds look like their parents and he asks Mime why he does not look like him. In the end Mime is forced to tell Siegfried about his parents and about the sword that was smashed by Wotan. Siegfried tells Mime to forge (make) the sword so that he can kill the dragon. Siegfried goes off.

First Wotan asks him who are the people whom Wotan loves a lot although he has to be harsh with them. Mime answers: the Wälsung race. Then Wotan asks him the name of the sword that Wotan left for Siegfried. Mime answers: Nothung. Finally Wotan asks him who can put the pieces of the sword together. Mime is now terrified because he does not know the answer. Wotan tells him the answer: it is the person who does not know fear. He says to Mime that he can keep his head for the moment. He will leave it to the fearless person to chop it off later.

When Mime and Siegfried are together again, Mime tries to frighten Siegfried so that he knows what fear is. He tells him all about the huge dragon in the cave. "Does that not frighten you?" he asks him. "Not a bit" answers Siegfried, who likes the thought of fighting a dragon. Siegfried works at the anvil and starts to make the sword. Mime is thinking of how he will trick Siegfried after the dragon has been killed, so that he can get the sword and kill Siegfried. At last Siegfried manages to make the mighty sword. He calls out its name: "Nothung"! Then he crashes the sword down on the anvil which splits into two pieces. 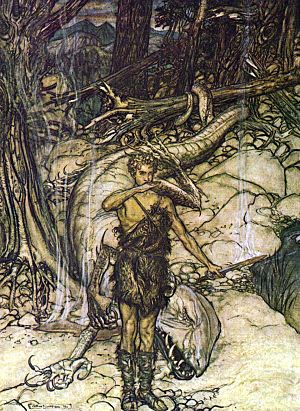 Outside the dragon’s cave Wotan, still disguised as a wanderer, meets Alberich (Mime’s brother who has not been in the story since the first opera). Alberich hates Wotan for having snatched the ring from him. Wotan does not care, and even wakes the dragon up, but the dragon does not want to fight them.

Mime and Siegfried appear. Siegfried is not frightened at all. He just wants to know where the dragon’s heart is so that he can kill it. Mime leaves him alone. Siegfried sits down in the forest and thinks. He is glad to know now that the ugly Mime is not his father. He hears a bird singing and he tries to imitate the bird’s song with a pipe he has made from a reed. He blows his horn and the dragon appears. Siegfried plunges the sword into the dragon’s heart. Siegfried instinctively puts his hand in the dragon’s mouth and tastes its blood. Suddenly he can understand what the bird is saying. The bird (originally sung by a boy but normally now by a woman) tells him to take the ring and the tarn helmet (which allows the wearer to change shape or make himself invisible). He takes them.

Mime and Alberich appear. They are arguing about who shall have the ring and the tarn helmet. Siegfried appears with both. Mime offers Siegfried a drink which is drugged. The bird warns Siegfried not to drink it. Siegfried kills Mime by chopping his head off with the sword. The bird then tells Siegfried about his beautiful bride Brünnhilde who is lying on a rock, protected by fire, waiting to be rescued by him. 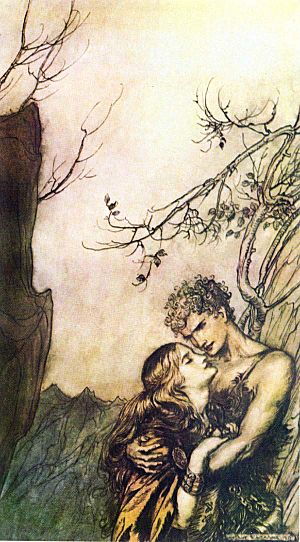 Erda, the wise Earth Goddess, tells Wotan about the Norns who are weaving the rope of destiny. She is surprised to hear how Wotan has punished Brünnhilde. Wotan says he now looks forward to the end of the gods, and wants Siegfried to take his place.

Siegfried arrives. He tells Wotan (who is a stranger to him) about his heroic deed with the dragon. He finds Wotan annoying and smashes Wotan’s sword. He goes to the rock where Brünnhilde is lying.

Siegfried bursts through the flames and finds the sleeping Brünnhilde. He gently takes off her helmet, then her breastplate. Suddenly he sees that she is a woman. He has never seen a woman before. For the first time in his life he is frightened, yet he very much wants to wake her up. He kisses her lips and she opens her eyes and sits up. She tells him that she has always loved him, even long before he was born. Siegfried feels his passion growing and tries to put his arms round her, but now it is Brünnhilde who is frightened. She tells him not to spoil the purity of their love. Finally they embrace.

It took Wagner more than 15 years to write this opera which is one reason why the music of Act Three is slightly different in style. Some ideas from the love music of Siegfried and Brünnhilde were later re-used by Wagner in a separate orchestral piece, called the Siegfried Idyll. Many of the leitmotifs (musical ideas that belong to particular characters or ideas) are ones that were heard in the Das Rheingold or Die Walküre. One unusual instrument in the orchestra is the anvil. It is played when Mime, and later Siegfried, are hammering on the anvil trying to forge the pieces of the sword together. The rhythm of this music is the same rhythm heard earlier in the Nibelung scene in Das Rheingold.

When Wagner started working on the opera he called it Der junge Siegfried (The young Siegfried) but by 1856 he had changed the title to Siegfried.

The German word “Sieg” means “victory” and “Fried” or “Friede” means “peace”. It is a good name for a hero. The role of Siegfried is sung by a tenor. The singer needs a very strong voice, often called a “Heldentenor” in German (a “heroic tenor”). He is on stage for most of the opera which lasts about four hours.

All content from Kiddle encyclopedia articles (including the article images and facts) can be freely used under Attribution-ShareAlike license, unless stated otherwise. Cite this article:
Siegfried (opera) Facts for Kids. Kiddle Encyclopedia.