Burlington was originally the county seat of Burlington County but in 1796, as the population had been increasing to the east away from the Delaware River, the county seat was moved to Mount Holly Township, a more central location.

The council of West Jersey Proprietors purchased roughly 30 miles (48 km) of riverfront land in 1676 from the Lenape Native Americans. Burlington was founded on part of that land by English settlers (primarily Quakers) in 1677, and served as the capital of the province until 1702, when West Jersey and East Jersey were combined into a single Crown Colony.

Burlington takes its name (including the county name) from the English east-coast town of Bridlington, of which Burlington was a district. It is now amalgamated into the larger Bridlington town.

The Quakers formally established their congregation in 1678. Initially, they met in private homes; between 1683 and 1687, Francis Collings constructed a hexagonal meeting house of brick. Over the next century, the membership grew substantially and a larger building was needed. The present meeting house on High Street was built in 1783 in front of the old meeting house and cemetery. The cemetery predated the first building. A tablet commemorates that the Lenape chief King Ockanickon, a loyal friend of the English settlers, was buried here in 1681. The oldest gravestone is inscribed "D.B. 1726." Many notable Quakers are buried here.

One of the oldest buildings in Burlington is known as the Revell House. Originally built in 1685 for George Hutchinson, it stood on East Pearl Street. The property was soon purchased by Thomas Revell, one of the original European settlers. Local tradition associates this house with the young Benjamin Franklin, who received gingerbread while traveling from Boston to Philadelphia. In the early 20th century, the house was purchased by the Annis Stockton Chapter of the DAR to become their clubhouse. The Colonial Burlington Foundation acquired and restored it in the 1950s. 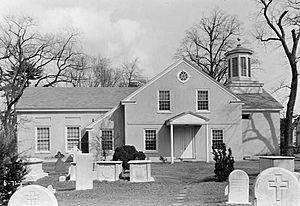 The original St. Mary's Episcopal church is the oldest church in New Jersey.

Many institutions established in the 18th century continue to function in the 21st century. After the Quakers, the second oldest religious congregation in Burlington were the Episcopalians. Their original church, Old St. Mary's, remains the oldest church in Burlington and New Jersey. The congregation was founded in 1702 by George Keith and John Talbot. Talbot became the first minister and laid the cornerstone for the church in 1703. He served as the church's rector until 1725. The congregation prospered, and the church became the see of the Anglican bishops of New Jersey. In 1846, under the leadership of Bishop and Rector George Washington Doane, construction was begun on New St. Mary's. This early Gothic Revival architecture church was designed by Richard Upjohn, who also designed Trinity Church at the foot of Wall Street in Lower Manhattan.

The Library Company of Burlington was organized in 1757 as a "free" library open to the public as well as members. There were 60 members of the original Library Company each paying ten shillings per year to support the institution. The Library received a Charter from King George II of Great Britain in 1758. The Library's books were kept in members' homes for a few years—Thomas Rodman's at 446 South High Street and, after 1767, Robert Smith's at 218 High Street. In 1789 the Library moved to its own building. The Library is currently in a stone building that was built on West Union Street in 1864. The Burlington Library is the oldest continuously operating library in New Jersey and the nation's seventh oldest.

The Endeavor Fire Company was organized in 1795 and was one of the four companies in the Burlington Fire Department when it was organized almost a century later. Endeavor was the first permanent firefighting organization in Burlington and remains one of the oldest fire companies under its original name in the state. By 1882, the Company had relocated to its present building, which was erected in 1852 as a Market House.

Burlington has been the home of many notable people including John Lawrence, a politician and his son, Captain James Lawrence. The elder Lawrence served in the State Assembly, as Mayor of Burlington, New Jersey in 1769, and as a member of the Provincial Council from 1771 to 1775. Unfortunately, he was suspected of being loyal to the British during the Revolution, which ended his career. His son was born on October 1, 1781 and became a legend during the War of 1812 with the command "Don't Give Up the Ship." Lawyer and writer, James Fenimore Cooper, who wrote The Last of the Mohicans, was also from Burlington.

The building at 301 High Street houses the oldest continuously operating pharmacy in New Jersey. Originally a dwelling, the ground floor was converted to commercial use around 1845 by William Allinson, a druggist, local historian, and leading Quaker abolitionist. He used the building as a center of anti-slavery activity. John Greenleaf Whittier denounced slavery from the doorstep, and local tradition holds that fugitive slaves hid in tunnels under the building.

During the 19th century, Burlington City was known for the quality and quantity of its manufacturing. The shoe industry rivaled shipbuilding and canning in prominence. The 1850 United States Census indicates that the largest number of men were employed in the shoe industry, followed closely by carpentry and bricklaying. J. Frank Budd got his start in the shoe business at a Burlington shoe company just after the Civil War. In 1887, J.F. Budd broke ground for a children's "shoeworks" at the corner of Penn and Dilwyn Streets. The company employed approximately 325 people and operated six days a week for ten hours a day. The J.F. Budd Baby Shoe Company billed itself as the "largest baby shoe plant in the world."

The commercial activity provided revenues for the City's cultural activity. In 1839, a Lyceum was erected as a venue for lectures, concerts, and public meetings. It served in that capacity until 1851, when it was turned over to the city to become City Hall. The municipal offices' move was concurrent with the adoption of a new City charter. The Oneida Boat Club was organized in 1873 by a group of 10 members. Over the next few years, the club grew rapidly and in 1876, they dedicated their newly built clubhouse on the banks of the Delaware River at York Street. The Oneida is the oldest continuously operating boat club on the Delaware River.

During this century, the City of Burlington grew in a grid pattern from the main crossroads of High and Broad Streets. Blocks of attached rowhouses built in the latest architectural style characterize the city as a 19th-century town. 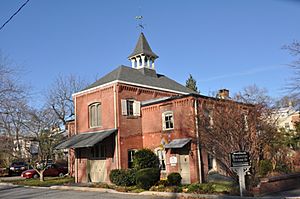 Burlington's waterfront park was developed as a result of urban renewal and flood control projects in the late 1960s and 1970s. The shoreline improvements—revetments, walkways, etc.—span the city's Delaware riverfront from the Burlington-Bristol Bridge to Assiscunk Creek. The remains of former waterfront industries, ferry terminals and docks were demolished. Development of an open, grassy park with a tree-lined waterfront esplanade has reconnected the city to its riverfront for recreation. This ensures that business properties are not at risk during floods and reduces damages.

The Oneida Clubhouse narrowly escaped demolition during the urban renewal campaign. It was saved and renovated. As the new esplanade was built on fill that added land between the building and river's edge, it created a landlocked clubhouse for the boat club.

Burlington Coat Factory was founded in 1924 as a wholesaler of ladies' coats and outerwear. The modern company was formed in 1972 when Monroe Milstein purchased a warehouse in the outskirts of the city of Burlington, and started selling coats and outerwear. The company gradually added other apparel, including suits, shoes, and accessories, and has branched out to include baby items and linens, all at discount prices. The original Burlington Coat Factory relocated to a new store in the fall of 2008. The company's corporate headquarters was moved to Burlington Township in 1988.

Unincorporated communities, localities and place names located partially or completely within the city include Burlington Island and East Burlington.

There were 3,898 households out of which 27.8% had children under the age of 18 living with them, 41.6% were married couples living together, 17.8% had a female householder with no husband present, and 35.3% were non-families. 29.9% of all households were made up of individuals and 14.3% had someone living alone who was 65 years of age or older. The average household size was 2.48 and the average family size was 3.09.

The Burlington-Bristol Bridge crosses the Delaware River, connecting Burlington to Bristol Township, Pennsylvania, and is operated by the Burlington County Bridge Commission. Construction of the bridge started on April 1, 1930, and the bridge opened to traffic on May 1, 1931. The bridge carries NJ 413 and Pennsylvania Route 413.

NJ Transit provides bus service in the city between Trenton and Philadelphia on the 409 and 418 routes and between Burlington and Camden on the 413 and 419 routes.

The NJ River Line light rail system provides transportation between the Trenton Transit Center in Trenton and the Walter Rand Transportation Center (and other stations) in Camden, with stops at Burlington South and Burlington Towne Centre. 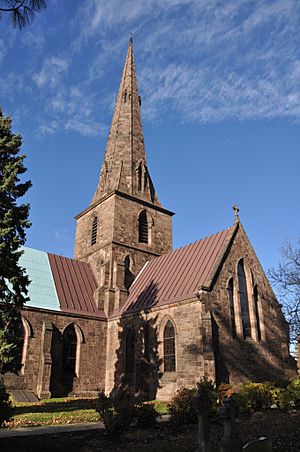 The new St. Mary's Church is a national historic landmark.

All content from Kiddle encyclopedia articles (including the article images and facts) can be freely used under Attribution-ShareAlike license, unless stated otherwise. Cite this article:
Burlington, New Jersey Facts for Kids. Kiddle Encyclopedia.