Burlington County is located east of the Delaware River and is part of the Philadelphia-Camden-Vineland, PA-NJ-DE-MD Combined Statistical Area, also known as the Delaware Valley. However, the county stretches across the state, and its southeast corner reaches tidal estuaries leading to southern New Jersey's Great Bay, which separates the county from the Atlantic Ocean.

Anglo-European records of Burlington County date to 1681, when its court was established in the Province of West Jersey. The county was formed on May 17, 1694, "by the union of the first and second Tenths." The county was named for Bridlington, a town in England. Burlington County was also the seat of government for the Province of West Jersey until its amalgamation with East Jersey in 1702, forming the Province of New Jersey. The county was much larger and was partitioned to form additional counties as the population increased. In 1714 one partition to the north became Hunterdon County, which itself was later partitioned to form three additional counties. The county seat had been in Burlington but, as the population increased in the interior, away from the Delaware River, a more central location was needed, and the seat of government was moved to Mount Holly in 1793.

Increasing industrialization led to improvements in transportation which increased to profitability of agriculture in the county. Population increases in the coastal towns due to successful international trade and ship repair led to road improvemnts throughout the county.

Most of the land in the county is coastal and alluvial plain with little relief. There are a few anomalous hills, such as Apple Pie Hill and Arney's Mount, the highest of not only the entire county but also among the highest in South Jersey at approximately 240 feet (73 m) above sea level. The low point is sea level along the Delaware and Mullica rivers.

The majority of the land is dotted with rivers, streams, and wetlands. Some of the largest and most important rivers in Burlington County include: Rancocas Creek, Assiscunk Creek, Pennsauken Creek, Mullica River, Batsto River, and Wading River.

The county borders Atlantic County, Camden County, Mercer County, Monmouth County and Ocean County in New Jersey; and both Bucks County and Philadelphia County across the Delaware River in Pennsylvania.

Average temperatures in the county seat of Mount Holly have ranged from a low of 22 °F (−6 °C) in January to a high of 87 °F (31 °C) in July, although a record low of −25 °F (−32 °C) was recorded in February 1934 and a record high of 104 °F (40 °C) was recorded in July 1936. Average monthly precipitation ranged from 2.92 inches (74 mm) in February to 4.87 inches (124 mm) in August. Burlington County has a humid-subtropical / humid continental transition climate, with relatively cold winters and hot summers. Severe weather is common in the warm months. Hurricanes have been known to strike Burlington County on occasion. Tornadoes are uncommon in the county. Severe thunderstorms, however, are quite common during the warm season. Snowfall is typical in the winter, with the snowfall averages in the county ranging from about 18 to 22 inches. The climate and weather of Burlington county is moderated by the nearby Atlantic Ocean, and rain is common year-round. The county seat receives about 41 inches of rain per year. Another interesting weather phenomena that occurs in Burlington County is radiative cooling in the Pine Barrens, a large Pine Forest and reserve that takes up a good portion of Southern and Eastern Burlington County. Due to sandy soil, on clear and dry nights these areas might be 10-15 degrees Fahrenheit colder than the surrounding areas, and there is a shorter frost-free season in these places. The sandy soil of the Pinelands loses heat much faster than the other soils or urban surfaces (concrete, asphalt) in the region, and so achieves a much lower temperature at night than the rest of the county. This effect is far less pronounced on moist, cloudy, or windy nights, as these three factors greatly reduce the radiative cooling of the sandy soil.

There were 166,318 households out of which 31.3% had children under the age of 18 living with them, 54.3% were married couples living together, 12% had a female householder with no husband present, and 29.5% were non-families. 24.4% of all households were made up of individuals, and 9.5% had someone living alone who was 65 years of age or older. The average household size was 2.62 and the average family size was 3.14. 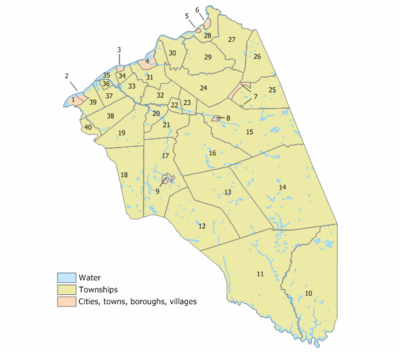 Municipalities in Burlington County (with 2010 Census data for population, housing units and area) are:

Most municipalities have their own municipal courts, which handle traffic and minor criminal and civil matters,. The New Jersey Superior Court handles more serious cases.

The Burlington County Library became the first county library in New Jersey when it was established in 1921 in Mount Holly. Library service grew in popularity and several moves ensued as more space became a necessity. By 1971, a new headquarters facility had been constructed, Cinnaminson and Bordentown had joined the system as branches, and a bookmobile visited areas without local facilities. Medford and Evesham had joined the system by 1975. The Pemberton Branch joined the system in 1987. Maple Shade became a branch in April 2001 while Riverton, the newest branch, joined in December 2003. With a larger network of 9 additional member libraries, the system provides a range of services to its residents.

The Turnpike extends through the county for approximately 30.1 miles (48.4 km) from Cherry Hill Township in Camden County to Hamilton Township in Mercer County (including the 6.5 mile (10.5 km) Turnpike Extension from the turnpike bridge over the Delaware River to the mainline at Exit 6).

The New Jersey Turnpike Authority plans to widen the Parkway to three lanes in each direction from exit 80 in South Toms River, Ocean County to exit 30 in Somers Point, Atlantic County, including widening of bridges at several river crossings. The Authority extended the 'dual-dual' configuration (inner car lanes and outer car / truck / bus lanes) south to Exit 6 from its former end at Exit 8A in Monroe Township, Middlesex County. This was finished in early November 2014.

The Burlington County Bridge Commission is responsible for maintaining the Tacony-Palmyra Bridge and the Burlington-Bristol Bridge, both of which cross the Delaware River. In addition, the agency maintains several bridges along CR 543 including the Riverside-Delanco Bridge over the Rancocas Creek.

The River Line is a diesel light-rail system operated for NJ Transit by the Southern New Jersey Rail Group on a former Pennsylvania Railroad line between the Trenton Transit Center in Trenton and the Walter Rand Transportation Center and other stations in Camden, with 11 stations in the county.

The BurLink bus service provides six routes, under service funded by the county and operated by the South Jersey Transportation Authority, providing connections to NJ Transit's bus and rail service.

Based on data from the Bureau of Economic Analysis, Burlington County had a gross domestic product (GDP) of $25.2 billion in 2018, which was ranked 10th in the state and represented an increase of 2.0% from the previous year.

Rowan College at Burlington County is a two-year public community college serving students from Burlington County. The school, located at campuses in Pemberton and Mount Laurel and was founded in 1966 and opened to students in 1969.

The Burlington County Library became the first county library in New Jersey when it was established in 1921 in Mount Holly. Library service grew in popularity and several moves ensued as more space became a necessity. By 1971, a new headquarters facility had been constructed, Cinnaminson Township and Bordentown had joined the system as branches, and a bookmobile visited areas without local facilities. Medford and Evesham Township had joined the system by 1975. The Pemberton Township Branch joined the system in 1987. Maple Shade Township became a branch in April 2001 while Riverton, the newest branch, joined in December 2003. With a larger network of nine additional member libraries, the system provides a range of services to its residents.

All content from Kiddle encyclopedia articles (including the article images and facts) can be freely used under Attribution-ShareAlike license, unless stated otherwise. Cite this article:
Burlington County, New Jersey Facts for Kids. Kiddle Encyclopedia.