The township was named for Mansfield, England.

There were 3,401 households out of which 25.6% had children under the age of 18 living with them, 63.5% were married couples living together, 6.2% had a female householder with no husband present, and 27.9% were non-families. 24.8% of all households were made up of individuals, and 16.8% had someone living alone who was 65 years of age or older. The average household size was 2.51 and the average family size was 3.01. 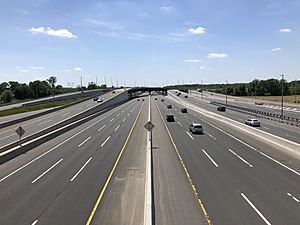 Mansfield is the location where Interstate 95 (I-95) joins the New Jersey Turnpike at Interchange 6. I-95 stretches for 3.1 miles (5.0 km) through the township, connecting Florence Township in the west (via the turnpike's Pennsylvania Extension) to Bordentown Township on the township's northern border (via the mainline turnpike). The mainline of the turnpike continues south from its junction with I-95 into Springfield Township. Local access to Mansfield is via interchanges with U.S. Route 206 in neighboring Bordentown Township and with U.S. Route 130 in neighboring Florence Township.

NJ Transit provides bus service in the township between Trenton and Philadelphia on the 409 route.

Students in public school for kindergarten through sixth grade attend the Mansfield Public Schools. As of the 2017–18 school year, the district, comprised of two schools, had an enrollment of 562 students and 58.1 classroom teachers (on an FTE basis), for a student–teacher ratio of 9.7:1. Schools in the district (with 2017-18 enrollment data from the National Center for Education Statistics) are John Hydock Elementary School with 198 students in grades K-2 and Mansfield Township Elementary School with 362 students in grades 3–6.

Children in public school for seventh through twelfth grades attend the schools of the Northern Burlington County Regional School District, which also serves students from Chesterfield Township, North Hanover Township and Springfield Township, along with children of military personnel based at Joint Base McGuire–Dix–Lakehurst. The schools in the district (with 2017-18 enrollment data from the National Center for Education Statistics) are Northern Burlington County Regional Middle School with 834 students in grades 7 - 8 and Northern Burlington County Regional High School with 1,335 students in grades 9-12. Both schools are in the Columbus section of Mansfield Township. Using a formula that reflects the population and the value of the assessed property in each of the constituent municipalities, taxpayers in Mansfield Township pay 46.5% of the district's tax levy, with the district's 2013-14 budget including $35.6 million in spending. The 7-12 district's board of education has nine members, who are elected directly by voters to serve three-year terms of office on a staggered basis, with three seats up for election each year. The nine seats on the Board of Education are allocated based on the population of the constituent municipalities, with two seats assigned to Mansfield Township.

Students from Mansfield Township, and from all of Burlington County, are eligible to attend the Burlington County Institute of Technology, a countywide public school district that serves the vocational and technical education needs of students at the high school and post-secondary level at its campuses in Medford and Westampton Township.

People who were born in, residents of, or otherwise closely associated with Mansfield Township include:

All content from Kiddle encyclopedia articles (including the article images and facts) can be freely used under Attribution-ShareAlike license, unless stated otherwise. Cite this article:
Mansfield Township, Burlington County, New Jersey Facts for Kids. Kiddle Encyclopedia.