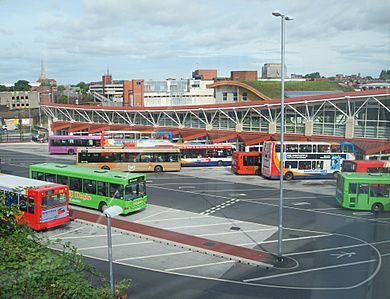 Mansfield bus station with the turf-roof and solar panels of Queen's Place low-energy building visible behind, and part of the old Co-op now known as Beale's to its left

Mansfield (/ˈmænzˌfiːld/) is a market town in Nottinghamshire, England. It is the main town in the Mansfield local government district and is a part of the Mansfield Urban Area. Nestling in a pocket within the Maun Valley surrounded by hills, the town is around 12 miles (19 km) north of Nottingham. The district of Mansfield is a largely urban area situated in the north west of Nottinghamshire populated by 99,600 residents, the vast majority of whom live in Mansfield (including Mansfield Woodhouse), with Market Warsop a secondary centre, and the remainder in the rural north of the district. Adjacent to the urban area of Sutton-in-Ashfield, Mansfield is the only major sub-regional centre in Nottinghamshire covering an area of 30 square miles (78 sq km). The Centre for Cities (2009) categorises the town as a 'small city', although it does not officially hold city status.

Mansfield is the only local authority area in the county to have a directly elected Mayor and in October 2008 Mansfield elected its first Youth Mayor.

Historically, the district has been influenced heavily by its industrial past with coal mining and textiles thriving in the district until their decline in the 1990s, but in common with the national economy the area has seen the decline of these sectors. Mansfield has 20.2% (12,890) of its working age population seeking key out of work benefits (based on a 63,800 total working age population) (NOMIS).

Over the last century the population has declined in parallel with this traditional industrial base. However much has been done to diversify the economic base and to replace jobs lost. Mid-year population forecasts reveal that since April 2008 the population has gone from 100,100 to 100,600 in 2009, 99,700 in 2010 to the current figure of 99,600 in 2011.

Settlement in the Mansfield area is known to date back to Roman times, with a villa discovered in 1787 by a Major Rooke between Mansfield Woodhouse and Pleasley and a cache of denarii coins found near King's Mill in 1849. After the end of Roman occupation, the early English royalty are said to have stayed there, with the Mercian Kings having used it as a base for hunting in the nearby Sherwood Forest.

The Domesday Book compiled in 1086 has the settlement recorded as Mammesfeld whereas in later market-petition documents of 1227 the spelling had changed to Maunnesfeld. By the time of King Richard II signing a Warrant in November 1377 granting the right for the tenants to hold a fair every year for four days, the spelling had changed again to Mannesfeld.

There are remains of the 12th century King John's Palace, in Clipstone between Mansfield and Edwinstowe. The area was originally a retreat for royal families and dignitaries in the 14th and 15th centuries due to its location within Sherwood Forest famed for its fresh air and exclusiveness. Access to the town was via a small horse-drawn carriageway from the city of Nottingham that was en route to Sheffield.

On West Gate within the town centre, a commemorative wall plaque marks the point that was thought to be the centre of Sherwood Forest 2013. A tree has been planted nearby.

Access to the town between the 16th and 17th centuries was via several inns and stable yards. The Harte, the Swan (which has a dating stone with 1490 was found during alterations), the Talbot, the White Bear, the Ram (timber dating to pre 1500) and the White Lion were known to date from medieval times. Several timber-framed cruck buildings were demolished in 1929 and another in 1973 which was documented by a local historical society during its demolition and was dated at circa 1400, or earlier. Other Tudor houses on Stockwell Gate, Bridge Street and Lime Tree place were also demolished to make way for new developments before they could be viewed for being listed properties. The majority of buildings remaining are from the 17th century onwards.

Mansfield railway station is a stop on the Robin Hood Line, a rail link connecting the town with Nottingham and Worksop. From 1964 until the opening of the line in 1995, Mansfield was, by some definitions, the largest town in Britain without a railway station, all the more remarkable because the town pioneered the railway in the East Midlands. From 1973 to 1995 the nearby station at Alfreton was named 'Alfreton and Mansfield Parkway' to encourage its use as a railhead for Mansfield. A Sunday rail service was restored to Mansfield in December 2008 - the town having been one of the largest on the rail network without one.

The town was originally the terminus of the Mansfield and Pinxton Railway, built as a horse-drawn plateway in 1819 and one of the first acquisitions of the newly formed Midland Railway. The Midland used the final section to extend its new Leen Valley line to the present station in 1849.

The Midland Railway extended its Rolleston Junction - Southwell branch to Mansfield in 1871, continued the line north of Mansfield to Worksop in 1875, opened a link from Mansfield Woodhouse to Westhouses & Blackwell in 1886, and completed another link from Pleasley through Bolsover to Barrow Hill in 1890. Mansfield had become a railway centre of some importance, but it was a Midland Railway centre.

The Midland Railway monopoly was broken by the locally promoted Mansfield Railway between Kirkby South Junction and Clipstone Junctions opened in stages between 1913 and 1916 for goods trains and in 1917 for Nottingham - Ollerton passenger trains calling at a second Mansfield passenger station. Although nominally independent, the Mansfield Railway connected with the Great Central Railway at both ends and trains were worked by the Great Central.

A tram service operated between 1905 and 1932, run by Mansfield & District Light Railways.

Buses in Mansfield are primarily operated by Stagecoach, with Trent Barton and National Express also operating in the area. Planning permission was given to develop a new bus station on the former Station Road car park which was expected to cost £7 million. The old bus station, built in 1977, handled around 1,500 buses and 16,000 passenger arrivals a day. It was the busiest bus station in the county with outdated design and appearance, and a poor outdoor waiting environment.

There were good pedestrian links to the pedestrianised town centre shopping streets, but the rail station was a few hundred yards' walk away. The new bus station addressed this problem, but has proven unpopular with shopkeepers near to the old facility, with several claiming a substantial reduction in trade.

The new bus station and transport interchange opened on 31 March 2013 in the choice location on a former car park close to the rail station; it is part of a regeneration scheme known as the 'Gateway To Mansfield', giving visitors to the town a clean and tidy first impression, including buildings with a 'themed' use of local sandstone. The scheme was implemented to improve facilities for locals, boost visitors to the town and help boost the local economy.

The new bus station increased passenger safety, additionally providing a more welcoming scene for visitors arriving by bus, and has been hailed as a successful enhancement to Mansfield town centre. Improvements have included a fully enclosed waiting area, automatic doors for comfort, fume reduction and safety, a tourist information centre, electronic bus and rail departure information, toilets and baby changing facilities. A tower with lift and stairs to an elevated walkway connects to the adjacent rail station.

Mansfield town centre is situated in a 'bowl', a depression in the River Maun valley from which the town name is derived (Old English – Maunesfeld). A town centre ring-road was created with the old five main roads radiating out: the A60 to the North and South, the A617 to the East and West, and the A38 running to the South-West. An inner ring-road runs one-way around the town's shopping centre, enabling access to car parking and the major roads.

The town is the northern terminus of the A38, which runs from Bodmin in Cornwall and is the longest 'A' road entirely within England. Mansfield can be reached in around 10 min from junctions 27, 28 and 29 of the M1 and is around 18 mi from the A1 at neighbouring Newark-on-Trent.

On Sundays, Mansfield Woodhouse railway station is the terminus of the line, no services travel beyond to Worksop. Overall, Mansfield is served by one service calling at Mansfield and terminating at Mansfield Woodhouse an hour, alongside an hourly from both stations to Nottingham station. For passengers wishing to travel to Worksop (only, all intermediate stations are closed on Sunday's) must do so by changing at Nottingham for Sheffield and at Sheffield for Lincoln, leaving at Worksop. 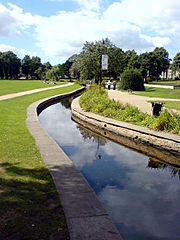 Mansfield has many parks and green spaces. Titchfield Park, located on the same site as the Water Meadows swimming complex, offers large grassy areas on both sides of the river Maun, crossed by two foot bridges. The park boasts a bowls green, hard tennis courts, basketball court, children's play area and many flowerbeds which are filled with blooms during the summer months.

Fisher Lane Park, located nearby stretching from the top of Littleworth through to Rock Hill, is a green space popular with dog walkers, kite flyers and skaters, since Mansfield District Council installed a concrete skate plaza, causing some controversy with locals.

However, the skate plaza has proven to be very popular with local youths, who access it daily. During the summer months, small fairs use Fisher Lane Park to set up some rides and stalls for local children.

Carr Bank Park is another park close to the town, which has a rocky 'grotto', bandstand and many flower beds, which are filled with blooms during the summer. The park has a new war memorial built of local sandstone dedicated to those who were killed in action since the end of the Second World War, to compliment the original setting unveiled after the First War in 1921.

Twin town and other associations

Mansfield has been officially twinned with Heiligenhaus in Germany since 1974

The following entries can be seen in a Mansfield-based, self-published website:

Mansfield experiences a maritime climatic regime, as is typical for all parts of the British Isles. This results in a narrow temperature range, evenly spread rainfall, low levels of sunshine, and often breezy conditions throughout the year. The closest weather station to Mansfield for which records are available is Warsop, approximately 4 miles to the North of Mansfield town centre.

The absolute minimum temperature record for the area is -19.1c(-2.4f), recorded during January 1987. 59.0 nights of the year report an air frost on average.

Rainfall averages 634mm annually, with 113 days reporting in excess of 1mm of rain. All averages refer to the observation period 1971-2000.

All content from Kiddle encyclopedia articles (including the article images and facts) can be freely used under Attribution-ShareAlike license, unless stated otherwise. Cite this article:
Mansfield Facts for Kids. Kiddle Encyclopedia.