St. Peter and St. Paul's Church, Mansfield is a parish church in the Church of England located in the town centre of Mansfield, Nottinghamshire.

In the churchyard, the war memorial and railings five metres south of the church are Grade II listed for special architectural or historic interest. 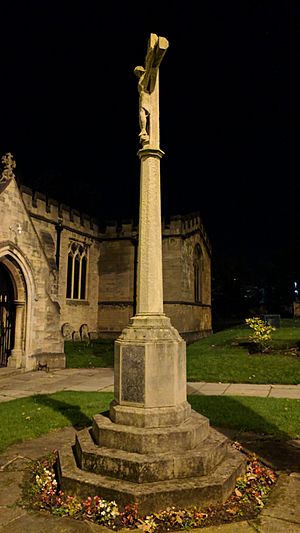 War Memorial to the south

The Boundary Wall and Gates to the Churchyard are also Grade II listed. 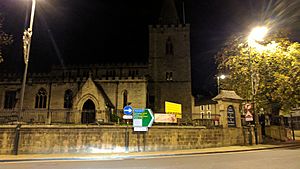 The original church dates from the early 12th century. Chantry chapels and the clerestory were added in the 15th or 16th centuries, and the spire dates from 1699.

In 2013, the church held a 900-year celebration, claiming to have evidence that the original tower was completed by December, 1113.

The 3-manual church organ was acquired in 1970 from Clare College, Cambridge It was substantially altered and enlarged by Noel Mander of London before installation in the south chapel in 1971. There was further work and restoration done, and the organ was re-consecrated at the end of 2000.

All content from Kiddle encyclopedia articles (including the article images and facts) can be freely used under Attribution-ShareAlike license, unless stated otherwise. Cite this article:
St Peter and St Paul's Church, Mansfield Facts for Kids. Kiddle Encyclopedia.