Kids Encyclopedia Facts
Not to be confused with workshop.

Worksop is the largest town in the Bassetlaw district of Nottinghamshire, England, on the River Ryton at the northern edge of Sherwood Forest. It is about 19 miles (31 km) east-south-east of the City of Sheffield and its population is estimated (Mid 2012) to be 44,970. It is also twinned with the German town Garbsen. Worksop is attracting an increasing quantity of commuters to the local area because of its close proximity of Nottingham, Lincoln and Sheffield.

Worksop is known as the "Gateway to the Dukeries", because of the now four obsolete ducal principal sites of which were closely located next to each other, south of the town. These four ducal locations were; Clumber House, Thoresby Hall, Welbeck Abbey and Rufford Abbey.

Evidence that Worksop existed before the Norman conquest of England in 1066 is provided by the Domesday Book of 1086:

"In Werchesope, (Worksop) Elsi (son of Caschin) had three carucates of land to be taxed. Land to eight ploughs. Roger has one plough in the demesne there, and twenty-two sokemen who hold twelve oxgangs of this land, and twenty-four villanes and eight bordars having twenty-two ploughs, and seven acres of meadow. Wood pasture two miles long, and three quarentens broad."

In about 1103, William de Lovetot established a castle and the Augustinian priory at Worksop. Subsequently, Worksop grew into a market town.

A skirmish occurred in the area during the Wars of the Roses on 16 December 1460, commonly known as the Battle of Worksop.

The building of the Chesterfield Canal in 1777, and the subsequent construction of the Manchester, Sheffield and Lincolnshire Railway in 1849, both of which passed through the settlement, led to a degree of growth. Discovery of sizeable coal seams further increased interest in the area.

Coal mining provided thousands of jobs in and around Worksop for most of the 19th and 20th centuries, but by the 1990s the pits had closed, resulting in high local unemployment. Drug abuse in the area also soared.

Worksop lies on the A57 with links to the A1, M1 and A60, allowing goods to be easily transported into and out of the area, explaining why Wilkinson and B&Q both have distribution centres in the area.

Worksop is on the Sheffield-Lincoln line, with trains to Sheffield, Doncaster, Meadowhall Interchange, Lincoln, Retford, Gainsborough and Shireoaks. The service is run by Northern. Worksop is also the terminus of the Robin Hood line to Nottingham and Mansfield, a service run by East Midland Trains. At weekends Northern rail run additional trains to Cleethorpes via Worksop. 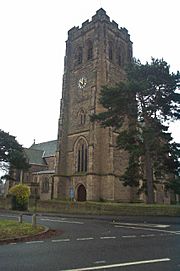 Officially titled the Priory Church of Saint Mary and Saint Cuthbert, is the Anglican parish church usually known as Worksop Priory. It was an Augustinian Priory founded in 1103. The church has a magnificent nave and detached gatehouse. Monks at the priory made the Tickhill Psalter, one of the finest illuminated manuscripts of the medieval period, now held in New York Public Library. After the dissolution of the Monasteries the east end of the church fell into disrepair, but the townspeople were granted the nave as a parish church. The eastern parts of the building have been restored in several phases, the most recent being in the 1970s when the architect Lawrence King rebuilt the crossing.

St. Anne's Church is an Anglican parish church and is recorded in the National Heritage List for England as a designated Grade II listed building. The church was built in 1911 by the Lancaster architects Austin and Paley. The church has an historic pipe organ originally built by Gray & Davison in 1852 for Clapham Congregational Church.

The Acorn Theatre is a 200-seat performing arts venue in the town centre, providing a programme of professional and amateur live theatre and folk music. It is a registered charity managed and run by volunteers,and the building is the home of several community performing groups and a youth theatre.

The Regal Centre has been taken by local businessmen, Martin Gilfoyle, Steve Broadbent and Chris Frampton to provide live entertainment and recording studio facilities including professional live music and arts performances and arts training courses and social support services. This is Worksop's only prime entertainment venue. The Savoy Cinema was opened on 23 March 2012.

All content from Kiddle encyclopedia articles (including the article images and facts) can be freely used under Attribution-ShareAlike license, unless stated otherwise. Cite this article:
Worksop Facts for Kids. Kiddle Encyclopedia.