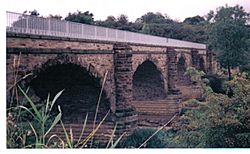 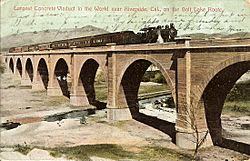 A viaduct is a bridge composed of several small spans. It is built for crossing a valley, dry or wetland, or forming an overpass or flyover.

The word viaduct has two parts from Latin: via for road and ducere, to lead. The ancient Romans did not use this word; it was invented in the nineteenth-century by analogy with aqueduct.

All content from Kiddle encyclopedia articles (including the article images and facts) can be freely used under Attribution-ShareAlike license, unless stated otherwise. Cite this article:
Viaduct Facts for Kids. Kiddle Encyclopedia.