Chesterfield has permanently preserved more than 7,000 acres (2,800 ha) of farmland through state and county programs and a township-wide transfer of development credits program that directs future growth to a designated "receiving area" known as Old York Village, which is a neo-traditional, New Urbanism community built on 560 acres (230 ha) incorporating a variety of housing types, neighborhood commercial facilities, a new elementary school, civic uses, and active and passive open space areas with preserved agricultural land surrounding the planned village. Construction began in the early 2000s and a significant percentage of the community is now complete. As of 2016 the construction is still on going and there is soon to be Chesterfield's first retail outlet, along with more condos and homes. Old York Village was the winner of the American Planning Association's National Outstanding Planning Award in 2004.

The land was first settled in 1677, when a group of primarily Quaker immigrants from England established the settlement of Crosswicks, the oldest of the three communities of the township. The village was named after the Crosswicks Creek that separates Burlington and Mercer counties. The other two villages were Recklesstown (now Chesterfield) and Plattsburg (now Sykesville). Recklesstown was named in honor of one of its founders, Joseph Reckless, until the community's name was changed in 1888 at the urging of a Congressman and local resident in the face of public scorn.

Chesterfield Township was originally formed on November 6, 1688. It was named after the 2nd Earl of Chesterfield whose seat of Chesterfield was in Derbyshire, where many of the township's earliest settlers had lived. The township was reformed by Royal charter on January 10, 1713, and was incorporated as one of New Jersey's initial 104 townships by the Township Act of 1798 of the New Jersey Legislature on February 21, 1798. Portions of the township were taken to form New Hanover Township (December 2, 1723) and Bordentown borough (December 9, 1825).

Crosswicks played a role during the American Revolutionary War. On June 23, 1778, British soldiers near the Crosswicks Creek shot the horse out from under Elias Dayton, a captain with the New Jersey militia. A cannonball from the period remains lodged in the side of the Friends Meeting House.

Unincorporated communities, localities and place names located partially or completely within the township include Crosswicks, Davisville and Extonville.

There were 1,539 households out of which 46.1% had children under the age of 18 living with them, 75.7% were married couples living together, 6.3% had a female householder with no husband present, and 14.8% were non-families. 10.6% of all households were made up of individuals, and 3.9% had someone living alone who was 65 years of age or older. The average household size was 3.02 and the average family size was 3.26.

There were 899 households, out of which 38.8% had children under the age of 18 living with them, 72.6% were married couples living together, 6.3% had a female householder with no husband present, and 17.2% were non-families. 12.8% of all households were made up of individuals, and 4.8% had someone living alone who was 65 years of age or older. The average household size was 2.91 and the average family size was 3.19. 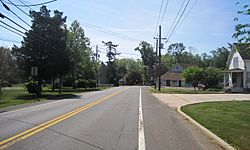 Major county roads that pass through include Route 528, Route 537 and Route 545.

The New Jersey Turnpike (Interstate 95) passes through the northwestern part of the township, entering on the western border with Bordentown Township and continuing for approximately 2.1 miles (3.4 km) into Hamilton Township in Mercer County. The nearest interchange is Exit 7 in neighboring Bordentown Township.

From 2004 when plans were announced until its completion in early November 2014, the Turnpike was widened along a 35-mile (56 km) stretch between Interchange 6 in Mansfield Township to Interchange 9 in East Brunswick Township in Middlesex County. Two new carriageways (to accommodate the outer roadways, or truck lanes) were built from Interchange 6 to Interchange 8A in Monroe Township, Middlesex County, and an additional lane on the existing outer roadways was added as well between Interchanges 8A and 9, bringing the roadway up to 12 lanes of traffic in a 3-3-3-3 "dual-dual" configuration of separate truck and car lanes in each direction.

There is no public transportation provided in the township. However, in neighboring Bordentown, the RiverLINE provides service to Camden and Trenton. NJ Transit provides service on the Northeast Corridor Line to Penn Station New York in nearby Hamilton Township, where many township residents commute for work.

The Chesterfield School District serves students in public school for pre-kindergarten through sixth grade at Chesterfield Elementary School. As of the 2017–18 school year, the district, comprised of one school, had an enrollment of 755 students and 58.3 classroom teachers (on an FTE basis), for a student–teacher ratio of 13.0:1. A replacement school building for grades K-6 was planned based on the results of a referendum passed in December 2007 that provided for spending of $37.7 million towards the project. The new school opened in January 2011, after having been pushed back from an original target opening date of September 2010.

Public school students in seventh through twelfth grades attend the schools of the Northern Burlington County Regional School District, which also serves students from Mansfield Township, North Hanover Township and Springfield Township, along with children of United States Air Force personnel based at McGuire Air Force Base. The schools in the district (with 2017-18 enrollment data from the National Center for Education Statistics) are Northern Burlington County Regional Middle School with 834 students in grades 7 - 8 and Northern Burlington County Regional High School with 1,335 students in grades 9-12. Both schools are in the Columbus section of Mansfield Township. Using a formula that reflects the population and the value of the assessed property in each of the constituent municipalities, taxpayers in Chesterfield Township pay 21.6% of the district's tax levy, with the district's 2013-14 budget including $35.6 million in spending. The 7-12 district's board of education has nine members, who are elected directly by voters to serve three-year terms of office on a staggered basis, with three seats up for election each year. The nine seats on the Board of Education are allocated based on the population of the constituent municipalities, with two seats assigned to Chesterfield Township.

Students from Chesterfield Township, and from all of Burlington County, are eligible to attend the Burlington County Institute of Technology, a countywide public school district that serves the vocational and technical education needs of students at the high school and post-secondary level at its campuses in Medford and Westampton Township.

People who were born in, residents of, or otherwise closely associated with Chesterfield Township include:

All content from Kiddle encyclopedia articles (including the article images and facts) can be freely used under Attribution-ShareAlike license, unless stated otherwise. Cite this article:
Chesterfield Township, New Jersey Facts for Kids. Kiddle Encyclopedia.