Bordentown is located at the confluence of the Delaware River, Blacks Creek and Crosswicks Creek. The latter is the border between Burlington and Mercer Counties. Bordentown is 5.8 miles (9.3 km) southeast from Trenton and 25.3 miles (40.7 km) northeast of Philadelphia.

Thomas Farnsworth, an English Quaker, was credited with being the first European settler in the Bordentown area in 1682, when he moved his family up river from Burlington. He made a new home on the windswept bluff overlooking the broad bend in the Delaware River. The Farnsworth's cabin was situated near the northwest corner of Park Street and Prince Street, perhaps where an 1883 frame house now stands. "Farnsworth Landing" soon became the center of trade for the region. Farnsworth is also the namesake of one of Bordentown's main street, Farnsworth Avenue.

Joseph Borden, for whom the city is named, arrived in 1717, and by May 1740 founded a transportation system to carry people and freight between New York City and Philadelphia. This exploited Bordentown's natural location as the point on the Delaware River that provided the shortest overland route to Perth Amboy, from which cargo and people could be ferried to New York City.

By 1776, Bordentown was full of patriots. Patience Lovell Wright, America's first female sculptor, was creating wax busts in King George's court in England. Later, however, Bordentown became a rabble-rousing hotbed. In addition to Joseph Borden's son (also named Joseph Borden), who became a colonel during the war, patriots Francis Hopkinson (a signer of the United States Declaration of Independence), Colonel Kirkbride, Colonel Oakey Hoagland and Thomas Paine resided in the area. Due to their well-published activity in Bordentown, the British retaliated. Hessians occupied the town in 1776, and the British pillaged and razed the town during May and June 1778.

Other notable people who have lived in the city include Clara Barton, who in 1852 started the first free public school in New Jersey and later founded the American Red Cross. A recreation of her schoolhouse stands at the corner of Crosswicks and Burlington streets. 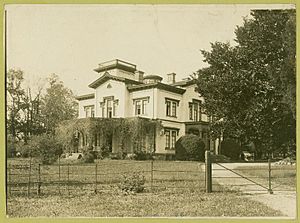 Former Bonaparte mansion, after its remodeling 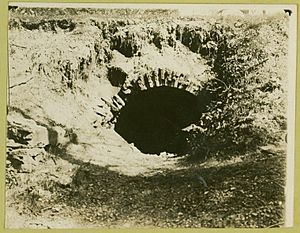 Several years after the banishing of his family from France in 1816, arriving under vigilant disguise as the Count de Survilliers, Joseph Bonaparte, former King of Naples and Spain and brother to Napoleon I of France, established his residence in Bordentown. He lived there for 17 years, entertaining guests of great fame such as Henry Clay, Daniel Webster and the future 6th U.S. President, John Quincy Adams. The residents of Bordentown nicknamed the Count, "The Good Mr. Bonaparte" (Good to distinguish him from his younger brother). He built a lake near the mouth of Crosswicks Creek that was about 200 yards wide and half a mile long. On the bluff above it he built a new home, "Point Breeze". The current Divine Word Mission occupies its former site along Park Street.

Today only vestiges of the Bonaparte estate remain. Much of it is actually the remains of a building remodeled in English Georgian Revival style in 1924 for Harris Hammon, who purchased the estate at Point Breeze as built in 1850 by Henry Becket, a British consul in Philadelphia. In addition to the rubble of this mansion and some hedges of its elaborate gardens, only the original tunnel to the river (broken through in several places) and the house of Bonaparte's secretary remain. Many descendants of Joachim Murat, King of Naples, also were born or lived in Bordentown, having followed their uncle Joseph there. After the Bonaparte dynasty was restored by Napoleon III, they moved back to France and were recognized as princes.

In August 1831, master mechanic Isaac Dripps of Bordentown re-assembled (without blueprints or instructions) the locomotive John Bull (originally called "The Stevens") in just 10 days. It was built by Robert Stephenson and Company, in England, and was imported into Philadelphia by the Camden and Amboy Railroad. The next year it started limited service, and the year after that regular service, to become one of the first successful locomotives in the United States. The John Bull is preserved at the Smithsonian Institution in Washington, D.C.

In 1866, Susan Waters moved into what is now one of the larger properties on Mary Street. This was a base from which she taught and produced over 50 of her works, many of which are painting of animals in natural settings and pastoral scenes. She was also an early photographer. In 1876 she was asked to exhibit several of her works at the Philadelphia Centennial Exposition.

In 1881, Rev. William Bowen purchased the old Spring Villa Female Seminary building (built on land purchased from the Bonapartes in 1837) and reopened it as the Bordentown Military Institute. In 1886, African-American Rev. Walter A. Rice established a private school for African-American children, the Manual Training and Industrial School for Colored Youth, in a two-story house at 60 West Street, which later moved to Walnut Street on the banks of the Delaware, and became a public school in 1894 under Jim Crow laws. The school, which was known as the Bordentown School, came to have a 400-acre (1.6 km2), 30-building campus with two farms, a vocational/ technical orientation, and a college preparatory program.

In 1909, the religious order Poor Clares established a convent in the former Motherhouse of the Sisters of Mercy on Crosswicks Street. The building still stands and is used as an assisted living home for non-ambulatory elderly, called The Clare Estate. The Order of Poor Clares moved to a new facility outside Bordentown City.

The city has become a destination for weekend dining as well as for the casual perusal of its book and record stores, historical sites and art galleries. The active downtown business association sponsors an annual Iris Festival & Art Show in early May, an annual Street Fair in mid- to late May, and an annual Cranberry Festival in early October. The Bordentown Historical Society sponsors other events, such as the Holiday House Tour and Peach Social.

The City of Bordentown is surrounded on three sides by Bordentown Township and on the western side by the juncture of the Delaware River and Crosswicks Creek, which is the border with Hamilton Township in Mercer County. It is bounded on the east by U.S. Route 130 and U.S. Route 206, on the south by Black's Creek and Interstate 295, and on the north by the Mile Hollow Run. Across the Delaware River is Falls Township in Bucks County, Pennsylvania.

There were 1,757 households out of which 24.9% had children under the age of 18 living with them, 39.2% were married couples living together, 13.1% had a female householder with no husband present, and 43.7% were non-families. 35.7% of all households were made up of individuals and 10.9% had someone living alone who was 65 years of age or older. The average household size was 2.23 and the average family size was 2.93.

U.S. Route 130 and U.S. Route 206 run through very briefly and intersect at County Route 528 in the city. The New Jersey Turnpike is outside in neighboring Bordentown Township with access at Interchange 7 to U.S. Route 206, which is signed as Bordentown-Trenton. Interstate 295 (which may not pass through) has two interchanges that take travelers into Bordentown: Exit 57 and Exit 56.

The Bordentown station at Park Street offers service between the Trenton Rail Station in Trenton and the Walter Rand Transportation Center (and other stations) in Camden, on NJ Transit's River Line Light rail system.

NJ Transit provides bus service in the township between Trenton and Philadelphia on the 409 route.

All content from Kiddle encyclopedia articles (including the article images and facts) can be freely used under Attribution-ShareAlike license, unless stated otherwise. Cite this article:
Bordentown, New Jersey Facts for Kids. Kiddle Encyclopedia.