Florence was incorporated as a township by an act of the New Jersey Legislature on March 7, 1872, from portions of Mansfield Township. The township was named for Florence, Italy. 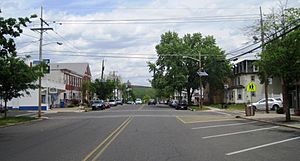 The Florence City Company, formed in 1849, organized the original layout of lots and streets in Florence. It also oversaw construction of the Florence Hotel and wharf. The Florence Iron Works was established in 1857 along the Delaware River by Richard Jones. It continued as a major force in the economy of the community, especially after ownership was transferred to Richard D. Wood in 1867. The 1900 United States Census reported that a good portion of the workforce was dependent on the foundry.

Florence was soon recognized as an attractive vacation spot with sandy beaches. Visitors could also partake of hydrotherapy offered by a center established about 1872 by Dr. Trall of Philadelphia.

Florence CDP (with a 2010 Census population of 4,426) and Roebling (3,715) are unincorporated communities and census-designated places (CDPs) located within the township. As of the 2000 Census, the CDP's population was 8,200. Up to and including the 2000 United States Census, the two CDPs had been combined as Florence-Roebling, which had a total population of 8,200 in 2000.

Other unincorporated communities, localities and place names located partially or completely within the township include Bustleton, Dobbins, Florence Station and Hoffner's Tract.

There were 4,775 households out of which 28.3% had children under the age of 18 living with them, 51.7% were married couples living together, 12.9% had a female householder with no husband present, and 31.2% were non-families. 25.4% of all households were made up of individuals, and 8.1% had someone living alone who was 65 years of age or older. The average household size was 2.54 and the average family size was 3.07.

Florence hosts a section of the New Jersey Turnpike, which extends from Burlington Township on the west and continues for 3.3 miles (5.3 km) into Mansfield Township.

The section includes Interchange 6A on the Pennsylvania Extension, which had been connected with Cedar Lane at an odd roadway setup (where Cedar Lane overpasses itself) the locals term the "whirlybird" until 1999, when the Authority constructed a double-trumpet interchange at US 130. The 6 toll gate is just east of Exit 6A on the Pennsylvania Extension. Interchange 6 (itself) is located in Mansfield Township.

Other highways and roads in the township include Interstate 295 U.S. Route 130 and County Route 543.

The NJ Transit River Line light rail system offers service in the township at Florence station at U.S. Route 130 and Roebling station at Hornberger Avenue providing southbound service to Camden and the Walter Rand Transportation Center (with transfers available to the PATCO Speedline) and northbound service to the Trenton Rail Station with connections to NJ Transit trains to New York City, SEPTA trains to Philadelphia, and Amtrak trains on the Northeast Corridor.

NJ Transit provides bus service on the 409 route between Trenton and Philadelphia.

BurLink bus service is offered on the B5 route between the Florence light rail station and Haines Industrial Center.

Given the accessibility of Florence to various rail and highway corridors, the township's economy is tied to its evolving role as a center for logistics. Florence and nearby towns in Burlington County have become prominent regional warehouse centers, attracting corporations like Amazon to build such facilities there.

Students from Florence Township, and from all of Burlington County, are eligible to attend the Burlington County Institute of Technology, a countywide public school district that serves the vocational and technical education needs of students at the high school and post-secondary level at its campuses in Medford and Westampton Township.

People who were born in, residents of, or otherwise closely associated with Florence Township include:

All content from Kiddle encyclopedia articles (including the article images and facts) can be freely used under Attribution-ShareAlike license, unless stated otherwise. Cite this article:
Florence Township, New Jersey Facts for Kids. Kiddle Encyclopedia.