The area now known as Evesham Township was originally settled by Quakers in 1672. The township was named either for the town of the same name in England or for prominent English settler Thomas Eves.

Evesham Township was formed on November 6, 1688, as Eversham (with an "R" in the middle of the name that was lost in subsequent years) in the Province of West Jersey before the county was formed. It was incorporated by the Township Act of 1798 of the New Jersey Legislature on February 21, 1798, as one of New Jersey's original group of 104 townships. Portions of the township were taken to form Washington Township (November 19, 1802), Medford Township (March 1, 1847) and Mount Laurel Township (March 7, 1872).

The Township was substantially larger than it is today, originally including what are now Mount Laurel, Medford, Lumberton, Hainesport, Shamong, and Washington Townships. The South Branch of the Rancocas on the East Side and Cropwell Creek on the West Side bound this area. Evesham Township was eventually incorporated in 1692 as one of the thirteen Townships in Burlington County. In 1802, a tract was cut off for Washington Township; in 1847, the Township was then divided in half, with the eastern half becoming Medford Township; and in 1872, Evesham was divided again, for the last time, with the northern part becoming Mount Laurel Township.

Marlton is a name commonly associated and interchangeable with the name Evesham, derived from the census-designated place within Evesham. The name Marlton came about in the early 19th century and stems from the word "marl", a naturally occurring mixture of green clay with remnants of shells that was used as a fertilizer, like manure. Its discovery helped local commerce and fueled the first "building boom", which took place in the 1830s and 1840s. Marl continued to be mined locally until 1930, when the pits were finally closed.

The Marlton area was recognized as a village in 1758. The village was named Marlton in 1845. The same year the "Evesham" Post Office and the "Evesham" Baptist Church both had their names changed to "Marlton" Post Office and the "Marlton" Baptist Church. The names remain the same today. Most maps and directional signs refer to Marlton instead of Evesham. The historic village, Olde Marlton, remains mostly intact and is a locally regulated Historic District. Full-time police services began in 1966.

In 1955, the United States Army opened the PH-32 Nike Ajax facility on Tomlinson Mill Road. This battery was one of twelve used to shield Philadelphia, Pennsylvania from aerial assault during the Cold War. The base was decommissioned in the mid-1960s and used for various functions, including a civil defense center. The site of the base is now a housing development which was built in the mid-1990s.

Marlton is an historic community, census-designated place (CDP) and unincorporated area located within Evesham Township with 10,260 residents (as of Census 2010) that covers 3.235 square miles (8.38 km2) of the township. "Marlton" is often used in place of the township's name, even when referring to locations beyond the boundaries of the CDP.

The township is one of 56 South Jersey municipalities that are included within the New Jersey Pinelands National Reserve, a protected natural area of unique ecology covering 1,100,000 acres (450,000 ha), that has been classified as a United States Biosphere Reserve and established by Congress in 1978 as the nation's first National Reserve. Part of the township is included in the state-designated Pinelands Area, which includes portions of Burlington County, along with areas in Atlantic, Camden, Cape May, Cumberland, Gloucester and Ocean counties.

There were 17,620 households out of which 32.8% had children under the age of 18 living with them, 57.1% were married couples living together, 9.8% had a female householder with no husband present, and 30.1% were non-families. 25.4% of all households were made up of individuals, and 8.6% had someone living alone who was 65 years of age or older. The average household size was 2.56 and the average family size was 3.12. 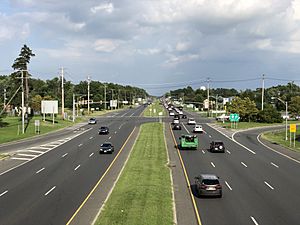 Evesham Township was the location of the Marlton Circle, which served as the junction of Route 70 and Route 73. In 2011, the circle, which handled 90,000 vehicles a day and was the site of as many as 175 accidents a year, was replaced by a grade-separated interchange that allows Route 73 to pass over Route 70.

NJ Transit provides bus service in the township on the 406 route that runs between Berlin and Philadelphia.

Public school students in ninth through twelfth grades attend Cherokee High School, which opened a 210,000-square-foot (20,000 m2) addition in September 2001. As of the 2018–19 school year, the high school had an enrollment of 2,144 students and 177.0 classroom teachers (on an FTE basis), for a student–teacher ratio of 12.1:1. The high school is part of the Lenape Regional High School District, which also serves students from Medford Lakes, Medford Township, Mount Laurel Township, Shamong Township, Southampton Township, Tabernacle Township and Woodland Township.

Students from Evesham Township, and from all of Burlington County, are eligible to attend the Burlington County Institute of Technology, a countywide public school district that serves the vocational and technical education needs of students at the high school and post-secondary level at its campuses in Medford and Westampton Township.

Private schools include St. Joan of Arc School, a Catholic school established in 1965 that serves students in preschool through eighth grade. The school operates under the supervision of the Roman Catholic Diocese of Trenton.

People who were born in, residents of, or otherwise closely associated with Evesham Township include:

All content from Kiddle encyclopedia articles (including the article images and facts) can be freely used under Attribution-ShareAlike license, unless stated otherwise. Cite this article:
Evesham Township, New Jersey Facts for Kids. Kiddle Encyclopedia.