Christina Victoria Grimmie was an American singer, songwriter, musician, actress and YouTuber known for her participation in the NBC singing competition The Voice and for her covers of hit songs by contemporary pop musicians. In June 2011, she released her debut EP, Find Me. Her studio album With Love was released in 2013. A second EP, Side A, was released in 2016. A posthumous release, Side B, was also made available on iTunes and Spotify. Her posthumous album, titled All Is Vanity, was released on June 9, 2017.

In 2014, Grimmie was a contestant on season 6 of The Voice and finished in third place. Adam Levine, her coach on the show, announced in the finale that regardless of the results he would sign her to his label 222 Records. Lil Wayne also offered to sign her to his label, Young Money Entertainment. She was signed with Island Records for a short time before being dropped. She took an acting role in 2016, making her first and only motion picture appearance in The Matchbreaker.

On June 10, 2016, Grimmie died of gunshot wounds inflicted in a targeted attack that followed her concert performance in Orlando, Florida.

Christina Grimmie was born to Tina and Albert Grimmie. Her older brother Marcus served as Christina's road manager during her performances. She was of Italian and Romanian descent. Grimmie grew up in Marlton, New Jersey, where she attended Bethel Baptist Christian School, Marlton Middle School, and Cherokee High School.

Her father noticed Grimmie's talent for singing when she was six years old, and she started playing the piano at age ten. Despite having received piano lessons, Grimmie said she played by ear.

Grimmie was an animal rights activist and participated in fundraising events for the Humane Society of the United States. The Christina Grimmie Animal Medical Fund was created in her honor. 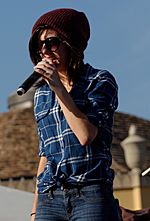 Grimmie auditioned for season 6 of NBC's singing competition, The Voice, as revealed on her Facebook page. During the Blind Auditions, she performed Miley Cyrus' hit song "Wrecking Ball". All four coaches, Adam Levine, Usher, Shakira, and Blake Shelton, turned their chairs for her, and she opted for Adam Levine. She finished in 3rd place, behind winner Josh Kaufman and runner-up Jake Worthington. 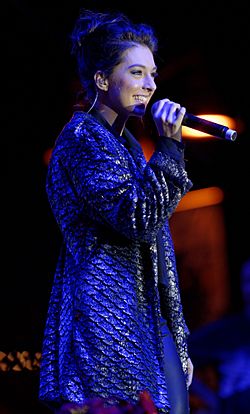 Grimmie possessed a light-lyric soprano vocal range of three octaves and three notes. In 2014, while on The Voice, Usher called her a "baby Céline Dion". Graham Nash said, "I'm amazed at the range and the control and the depth of her voice. At 20 years old? That's insane." Shakira deemed her high register "out of this world."

Grimmie grew up listening to contemporary Christian artist Stacie Orrico: "She has a really awesome voice and I was so drawn to it. I think the reason I do have a soul voice is because I grew up listening to her and she was my huge, huge influence. I wanted to sound just like her, I wrote songs that kinda sounded like something she would do." Grimmie cited Christina Aguilera as her main influence vocally. She also said she admired Beyoncé for her vocals. She said she liked dubstep and DJ music, as well as rock 'n roll and heavy metal artists Metallica, Pantera, Iron Maiden, and Tool.

All content from Kiddle encyclopedia articles (including the article images and facts) can be freely used under Attribution-ShareAlike license, unless stated otherwise. Cite this article:
Christina Grimmie Facts for Kids. Kiddle Encyclopedia.