Berlin was incorporated as a borough on March 29, 1927, from portions of Berlin Township, based on the results of a referendum held on April 26, 1927.

What is now Berlin was known in earlier times as "Longacoming." Local Native Americans used Lonaconing Trail to describe the travel route that ran through the area, connecting the Jersey Shore to the Delaware River. Another tradition cites early European visitors who found a stream at the head of the Great Egg Harbor River and appreciated the respite as being "long a coming".

Long-A-Coming became a stopping point for stagecoaches located at the halfway point between Philadelphia and Atlantic City. Upon the creation of Camden County in 1844, it was briefly named the county seat (while the area was still a part of Waterford Township), until 1848 when the seat moved to the city of Camden. A rail line was laid in 1853. Three years later, the Long-A-Coming railroad station was built. In February 1867, the station was renamed "Magnolia". This caused confusion because there was a community called Magnolia nearby. Three months later, the station's name changed to Berlin. The name "Berlin" may have been chosen as a reference to the city of Berlin in Germany, though the derivation is uncertain.

The borough is one of 56 South Jersey municipalities that are included within the New Jersey Pinelands National Reserve, a protected natural area of unique ecology covering 1,100,000 acres (450,000 ha), that has been classified as a United States Biosphere Reserve and established by Congress in 1978 as the nation's first National Reserve. Part of the borough is included in the state-designated Pinelands Area, which includes portions of Camden County, along with areas in Atlantic, Burlington, Cape May, Cumberland, Gloucester and Ocean counties. 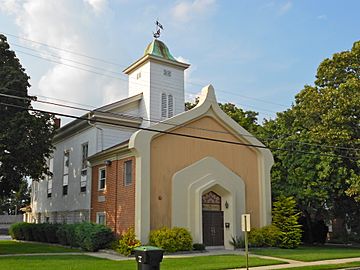 NJ Transit bus service is available in the borough on the 554 route, which operates between the Lindenwold train station and Atlantic City.

Camden County Airport is located one mile southwest of the central business district.

Berlin was formerly served by the Berlin Railroad Station.

The Berlin Borough School District serves public school students in pre-kindergarten through eighth grade at Berlin Community School. As of the 2017–18 school year, the district, comprised of one school, had an enrollment of 832 students and 67.6 classroom teachers (on an FTE basis), for a student–teacher ratio of 12.3:1. Many Community Education and Recreation (CER) programs are held at Berlin Community School, including preschool and after school programs.

Public school students in ninth through twelfth grades attend the Eastern Camden County Regional High School District, a limited-purpose, public regional school district that serves students at Eastern Regional High School from the constituent communities of Berlin Borough, Gibbsboro and Voorhees Township. As of the 2017–18 school year, the high school had an enrollment of 1,957 students and 145.0 classroom teachers (on an FTE basis), for a student–teacher ratio of 13.5:1. Seats on the nine-member board of education are allocated based on population, with Berlin Borough assigned two seats on the board.

Students from Berlin Borough, and from all of Camden County, are eligible to attend the Camden County Technical Schools, a countywide public school district that serves the vocational and technical education needs of students at the high school and post-secondary level at the Gloucester Township Campus in the Sicklerville section of Gloucester Township or the Pennsauken Camps in Pennsauken Township. Students are accepted based on district admission standards and costs of attendance and transportation are covered by the home district of each student.

Our Lady of Mount Carmel Regional School, founded in 1956, is an elementary school that operates under the auspices of the Roman Catholic Diocese of Camden.

People who were born in, residents of, or otherwise closely associated with Berlin include:

All content from Kiddle encyclopedia articles (including the article images and facts) can be freely used under Attribution-ShareAlike license, unless stated otherwise. Cite this article:
Berlin, New Jersey Facts for Kids. Kiddle Encyclopedia.