Pennsauken Township was incorporated as a township by an act of the New Jersey Legislature on February 18, 1892, from portions of the now-defunct Stockton Township.

The exact origin of the name Pennsauken is unclear, but it probably derives from the language of the Lenni Lenape people (a Native American group which once occupied the area) from "Pindasenauken", the Lenape language term for "tobacco pouch". Alternatively, the "Penn" in the township's name refers to William Penn, while "sauk" is a water inlet or outlet.

Pennsauken was home to America's first drive-in movie theater, created in 1933 with the opening of the Camden Drive-In in Pennsauken. It featured the comedy Wives Beware, released in the theaters as Two White Arms.

For 50 years, the township was the home to the Pennsauken Mart, a large multi-vendor indoor market, which was closed in January 2006 to make way for a sports arena/conference complex. Most of the vendors moved to the Grand Market Place in Willingboro Township.

The township includes Petty's Island, a 392-acre (1.59 km2) island in the Delaware River although most of the island actually sits across a narrow strait from neighboring Camden. Once an oil storage and distribution facility, the island is now the site of a container cargo shipping operation and nesting bald eagles. Petty's Island is currently the focal point of the township's waterfront redevelopment plan.

Pennsauken borders Philadelphia, Pennsylvania. The two municipalities are connected across the Delaware River by the Betsy Ross Bridge which is owned and operated by the Delaware River Port Authority. In New Jersey, Pennsauken borders Camden, Cherry Hill, Collingswood and Merchantville in Camden County, and Cinnaminson Township, Maple Shade Township and Palmyra in Burlington County. 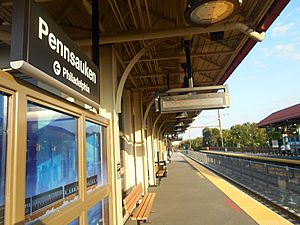 The township hosts two NJ Transit rail stops. The Pennsauken-Route 73 station on the River Line offers service between Trenton and Camden. The Pennsauken Transit Center on River Road features a transfer between the River Line and the Atlantic City Line, which provides rail service between Atlantic City and Philadelphia. The station was constructed at a cost of $40 million and opened for commuters in October 2013.

Pennsauken is home to a large industrial park that includes a Pepsi bottling plant and J & J Snack Foods.

Also available in the township is the Pennsauken Technical High School, which offers day and evening technical and vocational education to students from across the county.

Bishop Eustace Preparatory School is a coeducational, private high school for students in grades 9-12, founded in 1954 by the priests and brothers of the Society of the Catholic Apostolate (the Pallottines). St. Cecilia School is a K-8 elementary school that operates under the auspices of the Roman Catholic Diocese of Camden. Additionally there are students from Pennsauken who attend Resurrection Regional Catholic Schools in Cherry Hill.

People who were born in, residents of, or otherwise closely associated with Pennsauken Township include:

All content from Kiddle encyclopedia articles (including the article images and facts) can be freely used under Attribution-ShareAlike license, unless stated otherwise. Cite this article:
Pennsauken Township, New Jersey Facts for Kids. Kiddle Encyclopedia.