Kids Encyclopedia Facts
Not to be confused with Palmyra, Hunterdon County, New Jersey.

The area that is now Palmyra was settled in the late 17th century by Swedes, marking the northernmost border of New Sweden. A farmhouse built in 1761 by the third generation settlers still remains as the oldest house in Palmyra. Farming was the primary use of land in Palmyra and the surrounding area until after the construction of the Camden and Amboy Railroad in 1834 with a station in the area, after which railroad workers built homes on lots they purchased along the railroad right of way. The community was originally known as Texas, but a local landowner, Isaiah Toy, a descendant of the original Swedish settlers and a stockholder in the Camden and Amboy Railroad, who wanted to have a post office established in the community, convinced the railroad to change the name of the station in 1849 to Palmyra, which came from his love of ancient history. Palmyra was the name of an ancient trading center located in central Syria. The post office was established in 1851. Palmyra, along with Bordentown, Burlington, Moorestown Township, and Mount Holly Township, established its high school in the late 1890s, making it one of the oldest high schools in Burlington County and in New Jersey.

The community was laid out in 1850, when Joseph Souder's land was broken up into building lots to pay his debts, with the street names matching those of Center City, Philadelphia - Market, Arch, Race, and Vine (from south to north), and Front Street and numbered streets from the Delaware River. What is now Palmyra was part of Chester Township (now Maple Shade Township), which was created in 1694 and was one of the original 104 townships in New Jersey incorporated in 1798. Palmyra became a part of Cinnaminson Township when that township was set off from Chester in 1860. Palmyra Township was set off from Cinnaminson in 1894, and Palmyra was incorporated as a borough in 1923.

Unincorporated communities, localities and place names located partially or completely within the borough include West Palmyra.

The borough borders Cinnaminson Township and Riverton in Burlington County; Pennsauken Township in Camden County; and Philadelphia across the Delaware River in Pennsylvania.

The city is connected to the Tacony section of Philadelphia via Route 73 by the Tacony-Palmyra Bridge, which is named for the two communities connected by the bridge. The bridge was completed in 1929 at a cost of $4 million.

In 1999, a 250-acre (100 ha) nature park, Palmyra Nature Cove, was opened along the banks of the Delaware which borders Palmyra on the west; in addition to serving as a bird sanctuary, the park offers educational programs for schools and hiking trails for walkers. The park is open from dawn to dusk; no pets or bicycles are allowed. 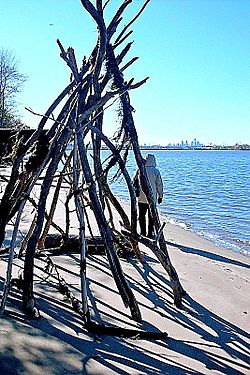 Driftwood along the banks of the Delaware River in Palmyra Nature Cove in Palmyra, NJ

There were 3,156 households out of which 23.5% had children under the age of 18 living with them, 43.1% were married couples living together, 13.1% had a female householder with no husband present, and 38.6% were non-families. 31.5% of all households were made up of individuals, and 9.6% had someone living alone who was 65 years of age or older. The average household size was 2.34 and the average family size was 2.97.

There were 3,004 households out of which 26.7% had children under the age of 18 living with them, 45.1% were married couples living together, 12.5% had a female householder with no husband present, and 38.3% were non-families. 32.0% of all households were made up of individuals and 10.1% had someone living alone who was 65 years of age or older. The average household size was 2.36 and the average family size was 3.02. 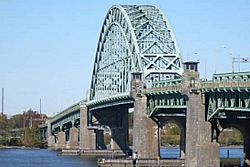 View of Tacony-Palmyra Bridge between Palmyra, NJ and Philadelphia, PA

Route 73 traverses the borough, connecting to the Burlington County Bridge Commission-operated Tacony-Palmyra Bridge at the roadway's northern terminus and interchanging with County Route 543, which is called Broad Street within Palmyra. 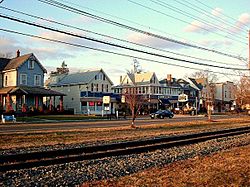 The Palmyra station on NJ Transit's River Line light rail system is located on East Broad Street. The station opened on March 15, 2004. Southbound service from the station is available to Camden, including a transfer to the PATCO Speedline available at the Walter Rand Transportation Center. Northbound service is available to the Trenton Rail Station with connections to NJ Transit trains to New York City, SEPTA trains to Philadelphia, and Amtrak trains.

NJ Transit provides bus service in the borough on the 419 route that runs between Camden and Burlington.

All content from Kiddle encyclopedia articles (including the article images and facts) can be freely used under Attribution-ShareAlike license, unless stated otherwise. Cite this article:
Palmyra, New Jersey Facts for Kids. Kiddle Encyclopedia.