Her father is of Filipino ancestry. Her mother is of Hawaiian and Russian ancestry. Her Catholic parents separated when she was a baby. At age six, she moved to Louisville, Kentucky. She took her German American stepfather's surname when he adopted her.

Since 2006, Scherzinger has had an on-off relationship with Lewis Hamilton. She has had bulimia nervosa.

will.i.am is the executive producer of her second album. 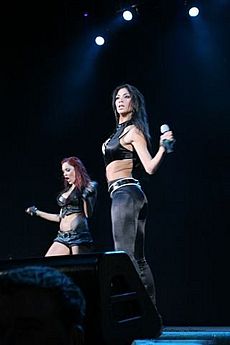 Scherzinger on stage with the Pussycat Dolls

All content from Kiddle encyclopedia articles (including the article images and facts) can be freely used under Attribution-ShareAlike license, unless stated otherwise. Cite this article:
Nicole Scherzinger Facts for Kids. Kiddle Encyclopedia.