Moana (also known as Vaiana or Oceania, in some markets) is a 2016 American 3D computer-animated musical adventure film produced by Walt Disney Animation Studios and distributed by Walt Disney Pictures. The 56th Disney animated feature film, the film is directed by Ron Clements and John Musker, and co-directed by Don Hall and Chris Williams, the film introduces Auliʻi Cravalho as Moana and features the voices of Dwayne Johnson, Rachel House, Temuera Morrison, Jemaine Clement, Nicole Scherzinger, and Alan Tudyk. The film features songs written by Lin-Manuel Miranda, Opetaia Foa'i and Mark Mancina, and an orchestral score also composed by Mancina. The plot is original, but takes inspiration from Polynesian mythology, for example the character of Māui.

The film tells the story of Moana, the strong-willed daughter of a chief of a Polynesian village, who is chosen by the ocean itself to reunite a mystical relic with the goddess Te Fiti. When a blight strikes her island, Moana sets sail in search of Maui, a legendary demigod, in the hope of returning the relic to Te Fiti and saving her people.

Moana was released theatrically in the United States on November 23, 2016 to positive reviews from critics, with particular praise going towards its animation, music, and vocal performances. The film went on to gross over $690 million worldwide. Along with Zootopia, it marked the first time since 2002 that Walt Disney Animation Studios released two feature films in the same year. It received two nominations at the 89th Academy Awards: Best Animated Feature, and Best Original Song ("How Far I'll Go").

On the Polynesian island of Motunui, the inhabitants worship the goddess of creation Te Fiti, who brought life to the ocean using a pounamu stone as her heart and the source of her power. Maui, the shape-shifting demigod of the wind and sea and master of sailing, steals the heart to give humanity the power of creation. However, Te Fiti disintegrates, and Maui is attacked by another who seeks the heart: Te Kā, a volcanic demon. He loses both his magical giant fishhook and the heart to the depths of the sea.

A millennium later, the ocean chooses toddler Moana, daughter of Motunui's chief Tui, to return the heart to Te Fiti. Tui takes Moana back to shore, causing her to lose the heart. Tui and Sina, Moana's mother, try to keep her away from the ocean to prepare her to become the island's chief. Sixteen years later, a blight strikes the island, killing vegetation and shrinking the fish catch. Moana suggests going beyond the island's reef to find more fish and figure out what is happening, but Tui forbids it. Moana tries conquering the reef but is overpowered by the tides and shipwrecked back to Motunui with Pua the pig.

Moana's grandmother, Tala, shows her a secret cave of ships, revealing that their people were voyagers until Maui stole Te Fiti's heart; the ocean was no longer safe without it. Tala explains that Te Kā's darkness is poisoning the island, but can be cured if Moana finds Maui and makes him restore the heart of Te Fiti, which she gives to Moana after having recovered it and had saved for her. Tala falls fatally ill and, on her deathbed, tells Moana that she must depart to find Maui.

Setting sail on a camakau from the cavern, Moana is caught in a typhoon and shipwrecked on an island where she finds Maui, who boasts about his achievements. She demands that Maui return the heart, but he refuses and traps her in a cave. She escapes and confronts Maui, who reluctantly lets her on the camakau. They are attacked by Kakamora—coconut pirates—who seek the heart, but Moana and Maui outwit them. Moana realizes Maui is no longer a hero since he stole the heart and cursed the world, and convinces him to redeem himself by returning the heart. Maui first needs to retrieve his magical fishhook in Lalotai, the Realm of Monsters, from Tamatoa, a giant coconut crab. While Moana distracts Tamatoa, Maui retrieves his hook but discovers he can no longer control his shape-shifting. He is overpowered by Tamatoa, but Moana's quick thinking allows them to escape with the hook. Maui reveals that his first tattoo was earned when his mortal parents abandoned him as an infant, and the gods, taking pity on him, granted him his powers. After reassurance from Moana, Maui teaches her the art of sailing, regaining control of his powers, and the two grow closer.

They arrive at Te Fiti's island, only to be attacked by Te Kā. Moana refuses to turn back, resulting in Maui's hook being badly damaged. Unwilling to lose his hook in another confrontation with Te Kā, Maui abandons Moana, who tearfully asks the ocean to find someone else to restore the heart and loses hope. The ocean obliges and takes the heart, but Tala's spirit appears, inspiring Moana to find her true calling. She retrieves the heart and sails back to confront Te Kā. Maui returns, having had a change of heart, and buys Moana time to reach Te Fiti by fighting Te Kā, destroying his hook in the process. Moana discovers Te Fiti is missing, and realizes Te Kā is Te Fiti, corrupted without her heart. Moana tells the ocean to clear a path, allowing her to return Te Fiti's heart, and the restored goddess heals the ocean and islands of the blight. Maui apologizes to Te Fiti, who restores his hook and gives Moana a new boat before falling into a deep sleep and becoming a mountain.

Moana bids farewell to Te Fiti, returning home where she reunites with her parents. She takes up her role as chief and wayfinder, leading her people as they resume voyaging.

In a post-credits scene, Tamatoa, stuck on his back, addresses the audience, knowing they would help if he was named Sebastian. 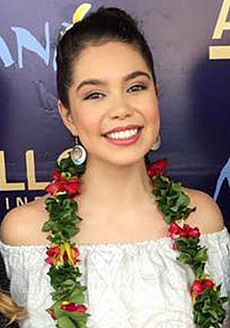 Auliʻi Cravalho at the film's premiere in Samoa in December 2016

Due to the success of the film, Moana was officially added to the Disney Princess franchise and was the 12th addition to the lineup.

All content from Kiddle encyclopedia articles (including the article images and facts) can be freely used under Attribution-ShareAlike license, unless stated otherwise. Cite this article:
Moana (2016 film) Facts for Kids. Kiddle Encyclopedia.