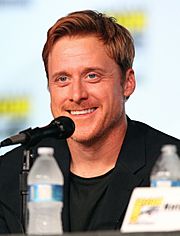 Alan Wray Tudyk (born March 16, 1971) is an American actor. He played Hoban "Wash" Washburne in Firefly, Doc Potter in 3:10 to Yuma and as Dutch in Transformers: Dark of the Moon. On voice acting, he voiced Lenny in Ice Age and other Disney characters in each movies and television.

Tudyk was born in El Paso, Texas. Tudyk was raised in Plano, Texas. He studied at Plane Senior High School, Lon Morris High School, and at the Juilliard School.

All content from Kiddle encyclopedia articles (including the article images and facts) can be freely used under Attribution-ShareAlike license, unless stated otherwise. Cite this article:
Alan Tudyk Facts for Kids. Kiddle Encyclopedia.