"How Far I'll Go" is a power ballad from Disney's 2016 animated feature film Moana. It was written and produced by Lin-Manuel Miranda. The song was performed in the film by American actress and singer Auliʻi Cravalho in her role as Moana. It was released along with the album on November 18, 2016. Canadian singer Alessia Cara also recorded the song for the Moana soundtrack. The song was nominated for Best Original Song at the 89th Academy Awards and Best Original Song at the 74th Golden Globe Awards but lost both to "City of Stars" from La La Land. It did, however, win the Grammy Award for Best Song Written for Visual Media at the 60th Annual Grammy Awards.

"How Far I'll Go" was composed as Moana's "I Want" song, following in the long tradition of "I Want" songs in 1990s Disney animated musicals. It replaced an earlier attempt called "More", for which the demo version recorded by Marcy Harriell was released as an outtake on the deluxe version of the soundtrack album. Although Miranda has stressed that he is still "very proud of" the song as a first draft, "More" was not good enough in retrospect because it merely expressed Moana's vague desire to see more since she had already figured out everything about the island. In contrast, "How Far I'll Go" expresses a deeper, richer message: Moana's struggle with the irresistible impulse to explore beyond the reef notwithstanding her genuine love for her island, her family, and her people. As Miranda explained to People: "To me that's much more complicated than, 'I hate it here and I want to get out,' ... To say, ‘I love it here, I love my parents, but why can't I stop walking to the ocean and fantasizing about getting out of here?' And questioning that instinct? It's even more confusing. And that's a valid story too."

To make himself write a song more compelling than "More", Miranda "went method". According to Miranda, he locked himself in his childhood bedroom at his parents' residence for an entire weekend in order to force his mind back to age 16 (the same age as Moana in the film), a time when he was facing what seemed like an "impossible distance" between the reality of his pleasant middle-class childhood which had no connection to show business whatsoever, and his dreams of a career in show business. He was well aware that he was composing the next Disney "I Want" song after "Let It Go" and that whatever he wrote had to be different from "Let It Go".

According to sheet music published at Sheetmusicdirect.com by Disney Music Company, "How Far I'll Go" is a moderate tempo of 82 beats per minute. Written in common time, the song is in the key of E major with a key change to F major for the final 10 measures. Auliʻi Cravalho's vocal range spans from B3 to D5 during the song. 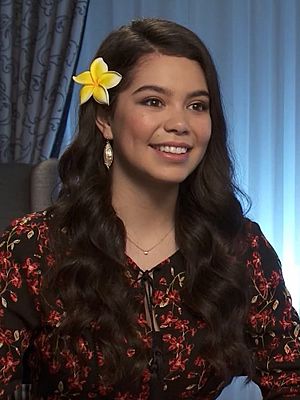 When the movie had its first theater release worldwide, the song numbered 44 versions, including a special Tahitian-language adaptation created specifically for the movie. For promotional purposes, South African singer Lira and Filipino singer and actress Janella Salvador recorded their own English-language versions of the song, while Indonesian singer Maudy Ayunda and Malaysian singer Ayda Jebat recorded their own versions of the song respectively in Indonesian and Malay language.

In June 2017, a Māori-language version of the movie, featuring four voice-actors from the original English cast, was announced. Three weeks later, New Zealander Jaedyn Randell was introduced as Moana's voice. The movie was released in September 2017. In the same year, Shruti Rane (Hindi) reprised her role in the Bengali-language version of the movie.

In November 2017, a Hawaiian-language dubbing was announced to be under way, with Auliʻi Cravalho reprising her role as Moana. The movie premiered on June 10, 2018.      Highlighted versions were released later than 2016

Canadian singer and songwriter Alessia Cara recorded "How Far I'll Go" for the Moana soundtrack, with the song being released ahead of the soundtrack on October 28, 2016.

The official music video for the song, directed by Aya Tanimura, was released on November 3, 2016. Derek Lawrence of Entertainment Weekly described the video: "The video finds Cara roaming an empty beach as she belts out lyrics that reflect the film’s plot about a young Polynesian girl setting sail for an epic adventure." The video was filmed at El Matador Beach in Malibu, California.

All content from Kiddle encyclopedia articles (including the article images and facts) can be freely used under Attribution-ShareAlike license, unless stated otherwise. Cite this article:
How Far I'll Go Facts for Kids. Kiddle Encyclopedia.