Let It Go facts for kids

Kids Encyclopedia Facts
This page is about the song from Disney's Frozen. For other uses, see Let It Go (disambiguation).

"Let It Go" is a song from Disney's 2013 computer-animated feature film Frozen, whose music and lyrics were composed by husband-and-wife songwriting team Kristen Anderson-Lopez and Robert Lopez. The song was performed in its original show-tune version in the film by American actress and singer Idina Menzel in her vocal role as Queen Elsa. It was later released as a single, being promoted to adult contemporary radio by Walt Disney Records in January 2014. Anderson-Lopez and Lopez also composed a simplified pop version (with shorter lyrics and background chorus) which was performed by actress and singer Demi Lovato over the start of the film's closing credits. Disney's music division planned to release Lovato's version of the song before Menzel's, as they did not consider Menzel's version a traditional pop song. A music video was separately released for the pop version.

It is the first song from a Disney animated musical to reach the top ten of the Billboard Hot 100 since 1995, when Vanessa L. Williams's "Colors of the Wind" from Pocahontas peaked at number four on the chart. The song is also Menzel's first single to reach the top 10 on the Billboard Hot 100 chart, making her the first Tony Award winner for acting to ever reach the top 10. The song was the ninth best-selling song of 2014 in the United States with 3.37 million copies sold in that year. As of December 2014[update], the song had sold 3.5 million copies in the US. It was the biggest-selling foreign song from any original soundtrack in South Korea as of 12 March  2014 (2014 -03-12)[update].

The song presents Queen Elsa, who flees her kingdom when she publicly loses control of her ability to generate ice. Up in the mountains and away from the townspeople, Elsa realizes that she no longer needs to hide her ability and rejoices in not only being able to use her power freely but also the freedom from others' expectations of her as a royal. She sheds her royal accessories, creates a living snowman, and builds a magnificent ice castle for herself.

"Let It Go" reached the top five on the Billboard Hot 100 chart, and won both the Academy Award for Best Original Song in 2014 and the Grammy Award for Best Song Written for Visual Media in 2015. The song gained international recognition, becoming one of the most globally recorded Disney songs, with versions sung in 41 different languages for the film's international releases.

According to the International Federation of the Phonographic Industry, "Let It Go" sold 10.9 million copies in 2014, becoming the year's fifth best-selling song.

A remix EP was released digitally by Walt Disney Records on May 19, 2014. The EP features four remixes by Dave Audé, Papercha$er, DJ Escape & Tony Coluccio and Corbin Hayes. Armin van Buuren produced another remix of the song for the remix album, Dconstructed. 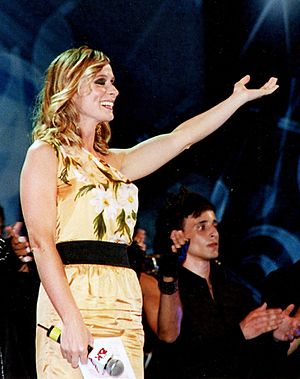 Besides the original English version, Disney Character Voices International arranged for Frozen to be dubbed into another 41 languages and dialects worldwide, to which 3 more versions were added in the following years, raising the number of official versions to 44. A major challenge was to find sopranos capable of matching Menzel's warm vocal tone and vocal range in their native languages. Rick Dempsey, senior executive at Disney Character Voices International regarded the process as "exceptionally challenging", explaining, "It's a difficult juggling act to get the right intent of the lyrics and also have it match rhythmically to the music. And then you have to go back and adjust for lip sync! [It]... requires a lot of patience and precision".

On January 22, 2014, Disney released a multi-language version of the "Let It Go" musical sequence, which featured vocal performances of 25 different voice actresses who portrayed Elsa in their respective dubbing versions of the film. At the annual meeting of the shareholders of the Walt Disney Company on March 18, 2014, in Portland, Oregon, chairman and chief executive officer Bob Iger praised the team who did "an incredible job casting fantastic international talent so that Frozen truly belongs to the world," then showed the entire multi-language video clip of "Let It Go" to the assembled shareholders. On March 31, 2014, an in-studio multi-language video of the song was released, showing singers of 25 different languages recording their versions of "Let It Go".

On April 15, 2014, Walt Disney Records released a compilation album titled Let It Go: The Complete Set, with all 42 foreign-language film versions of "Let It Go" and nine end credit versions.

The Italian version, along with the whole Italian adaptation of the movie, was awarded best foreign dubbing worldwide.

In South Korea, the Korean version of the song by Hye Na Park [ko] reached number 80 on the Gaon Music Chart in March, while the Japanese versions of the song performed by Takako Matsu reached number 2 on the Japan Hot 100 after the film's Japanese release in March 2014 and was certified million for digital downloads in Japan in May 2014.

Some viewers outside the film industry, including one evangelical pastor and commentators, believe that the film is a promotion for the normalization of homosexuality, while others have argued that the character of Elsa is a representation of positive LGBT youth and the song is a metaphor for coming out. The LGBT community, however, had a mixed reaction to these claims. When Frozen co-director Jennifer Lee was asked about the purported gay undertones, she stated that the film's meaning was open to interpretation: "I feel like once we hand the film over, it belongs to the world, so I don't like to say anything, and let the fans talk. I think it's up to them." Lee added that the film's meaning was also inevitably going to be interpreted within the cultural context of being made in the year 2013.

Another interpretation for the song and the movie is that they promote self-affirmation for people with disabilities, especially those on the autism spectrum. Co-writer Kristen Andersen-Lopez has stated that her younger brother has autistic traits and that inspired the song insofar as it deals with the concept of having a "special sibling."

"Let It Go" won the Academy Award for Best Original Song at the 86th Academy Awards, where a shortened rendition of the show-tune version was performed live by Menzel; with the award, Robert Lopez became one of few people to have won an Emmy, Grammy, Oscar, and Tony.

The decision to release a single for "Let It Go" was made after the song was written and was presented to Disney. Kristen Anderson-Lopez and Robert Lopez selected American singer and former Disney Channel star Demi Lovato, who also appears on Disney's Hollywood Records roster, to cover the song on the soundtrack album. It was included in the deluxe edition of Demi.

Lovato's version was officially released in nine other languages, eight of which are included into "Let It Go the Complete Set": French, Indonesian, Italian, Japanese, Kazakh, Korean, Malay, Mandarin Chinese (China's version), Spanish (Latin American version) and Russian. The Indonesian pop version was released as leading single of We Love Disney, Indonesia. Anaïs Delva and Marsha Milan, who performed the song in French and Malay respectively, also voiced Elsa in the movie, performing the same song in its movie version.

In South Korea, the pop version of the song by Hyolyn reached number six on the Gaon Music Chart in February, while the Japanese versions of the song, performed by May J., reached number 8 on the Japan Hot 100 after the film's Japanese release in March 2014 and was certified platinum for 250,000 downloads. May J. recorded a rearranged version of the song on her album Heartful Song Covers, which was released on March 26, 2014.      Highlighted versions were released later than 2013

Anderson-Lopez said that Lovato was chosen because of the singer's own personal life; "She had a past that she's pretty open about that is similar to Elsa's journey of leaving a dark past and fear behind and moving forward with your power." Lovato indeed identified herself with the song's context, stating "It's so relatable. Elsa is finding her identity; she's growing into who she is and she's finally accepting her own strength and magical powers. Instead of hiding it, like she's done all her life, she's letting it go and embracing it."

The music video was released on November 1, 2013. It was directed by Declan Whitebloom.

Many cover versions have been recorded internationally. In February 2014, Alex Boyé recorded a light Africanized tribal cover of the song, featuring the One Voice Children's Choir and Lexi Walker as Elsa.

The Piano Guys' cover version mixes parts of Antonio Vivaldi's Concerto No. 4 in F minor, Op. 8, RV 297, "L'inverno" (Winter) from The Four Seasons into the original. The music videos of both covers were filmed in the ice castles in Midway, Utah.

In March 2014, Brian Hull recorded a cover of the song while impersonating various Disney characters such as Winnie the Pooh, Tigger, Mickey Mouse, Minnie Mouse and Goofy.

French deathcore/metalcore band Betraying the Martyrs covered "Let It Go", as a single from their album Phantom in July 2014.

Norwegian YouTube singer Per Fredrik Pellek Asly or "PelleK", covered a power metal version of the Lovato version of the song on December 16, 2013, collecting more than 5 million views.

In February 2014, a parody YouTuber by the name of Malinda Kathleen Reese used Google Translate to translate the song's lyrics between multiple languages and back to English, revealing expected humorous mistranslations, with lines such as "Let us very angry" and "Give up, tune in, slam the door."

On November 4, 2014, Connie Talbot recorded a cover of the song as a single from her EP album Gravity.

Lea Michele covered the song as her character Rachel Berry in the Glee sixth-season premiere episode "Loser Like Me". Idina Menzel plays her on-screen birth mother Shelby Corcoran in the series.

It has been alleged by some commentators that one of the promotional songs for the 2022 Winter Olympics, "The Snow and Ice Dance," has suspicious similarities with "Let It Go." A Chinese media outlet cited technical analysis of the two songs: Both songs employ a piano as the major instrument, have similar prelude chords and an eight-beat introduction, and they run at almost exactly the same tempo.

Actress Maisie Williams sang the song in an Audi commercial that aired during the broadcast of Super Bowl LIV in early February 2020.

On May 21, 2020, a parody "Let Them Go" was aired by the Australian Broadcasting Corporation: "Let them go, Let them go, Just shove them out the door ...". This called for the ending of school closures in response to COVID-19 and was performed by Canberra singer Kirrah Amosa.

In September 2020, Japanese composer Yoshiki created a new classical arrangement of the song for the Disney My Music Story: Yoshiki special on Disney+.

All content from Kiddle encyclopedia articles (including the article images and facts) can be freely used under Attribution-ShareAlike license, unless stated otherwise. Cite this article:
Let It Go Facts for Kids. Kiddle Encyclopedia.